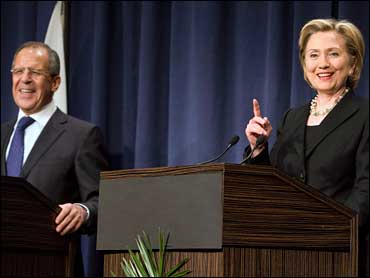 (AP)
Following a meeting with Russian Foreign Minister Sergey Lavrov in Geneva, Secretary of State Hillary Clinton today predicted that the two countries will complete a strategic arms reduction treaty by the end of 2009, the Associated Press reports.

As to what was discussed, Clinton told the press that the two officials talked about Iran's nuclear ambitions and the war in Afghanistan. Clinton said that both sides expressed a desire to restart talks on a non-proliferation agreement, but that no formal deals were reached.

"We believe that Russia and the United States have the opportunity to cooperate on missile defense," Clinton said, according to the Associated Press.

The meeting between the two high-profile offices came days after the Obama administration tried to tamp down reports that a letter to Russian President Dmitry Medvedev reportedly offered a "quid pro quo" deal to cancel plans for European missile defense shield in exchange for helping to prevent Iran from acquiring long-range missiles. President Obama admitted that he touched on both issues, but did not offer to make a deal.