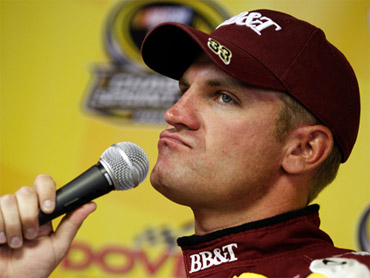 Clint Bowyer gave a defiant defense of his Chase-opening victory, saying he "wouldn't cheat" to win a race after his car failed a follow-up inspection.

He also defended his Richard Childress Racing team Friday before a race at Dover International Speedway.

Bowyer said he's looking for answers about why NASCAR levied harsh penalties against him that crippled his chances at winning the Chase for the Sprint Cup championship. He was penalized 150 points after Sunday's win at New Hampshire and fell from first to 12th in the standings. He is appealing the ruling.

Wilson was at the track Friday because the penalties are under appeal.

"I wouldn't cheat to win a race in this sport," Bowyer said. "We have a lot more integrity for myself and our race team at RCR."

Bowyer said his team was "triple sure" his car was legal after a warning following the previous race. Bowyer blamed the issue on the wrecker hitting the rear bumper of the car when it was pushed into the winner's circle.

"I'm still proud of that win," Bowyer said. "I don't believe that we did anything wrong. I guess I'll go on the record and say that."

NASCAR said the No. 33 Chevrolet from Sunday's race had been altered and did not meet its strict specifications. Team owner Richard Childress said in a statement that the penalty was handed down because the car was out of tolerance "less than 1-16 of an inch."

Bowyer's car passed its initial inspection at New Hampshire on Sunday, but was taken by NASCAR back to its North Carolina research and development center for a more thorough examination. It was there that NASCAR found the rear end of the car had been manipulated.

Bowyer said there was an "ugly meeting" after the warning that was called by Childress to make sure the car passed inspection the next time around. Bowyer said he knew, first place or last, the Chevrolet would be inspected again. He said that makes it all the more puzzling that NASCAR feels the team would knowingly try to gain an advantage. Bowyer thought the issue was dead once the car passed inspection at the track.

"How can a car pass pre- and post-race inspection and three days later get such a huge fine?" Bowyer said.

NASCAR had already called in RCR officials to warn them that Bowyer's Chase-clinching car from the Sept. 11 race at Richmond had nearly failed inspection because its back end was very close to the mandated limits.

Bowyer said he appreciated that NASCAR warned them.

Bowyer had a six-point list of complaints and clarifications about how his car ended up with such a crushing penalty. He was passionate in stating his case that his No. 33 crew did nothing wrong and how the ruling tarnished his victory.

Bowyer led a race-high 177 laps, lost the lead to Tony Stewart, but stretched his final tank of gas 92 laps to win the race when Stewart ran out of fuel right before the final lap. The victory snapped an 88-race winless streak for Bowyer.

"If that (infraction) won me that race, I'd gladly give it back to them," he said. "We won that race on fuel mileage."

RCR has two other cars in the Chase. Kevin Harvick - who moved up to second in the standings, 45 points behind Denny Hamlin, after Bowyer's penalty - and Jeff Burton, who is ninth in the Chase.

"It's an odd circumstance," Burton said. "I'm not questioning NASCAR's measuring abilities, but the intent was certainly to be 100 percent legal. There is a circumstance that's odd there."