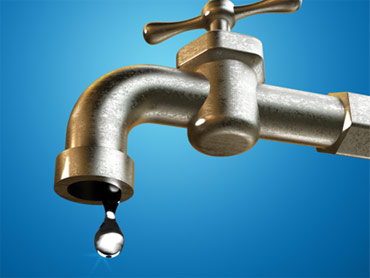 WASHINGTON - Climate change is likely to diminish already scarce water supplies in the Western United States, exacerbating problems for millions of water users in the West, according to a new government report.

A report released Monday by the Interior Department said annual flows in three prominent river basins — the Colorado, Rio Grande and San Joaquin — could decline by as much 8 percent to 14 percent over the next four decades. The three rivers provide water to eight states, from Wyoming to Texas and California, as well as to parts of Mexico.

The declining water supply comes as the West and Southwest, already among the fastest-growing parts of the country, continue to gain population.

Soot key to rapid Arctic melt?
If this glacier keeps melting, watch out

Interior Secretary Ken Salazar called water the region's "lifeblood" and said small changes in snowpack and rainfall levels could have a major effect on tens of millions of people.

The report will help officials understand the long-term effects of climate change on Western water supplies, Salazar said, and will be the foundation for efforts to develop strategies for sustainable water resource management.

The report notes that projected changes in temperature and precipitation are likely to alter the timing and quantity of stream flows in all Western river basins, with increased flooding possible in the winter due to early snowmelt and water shortages in the summer due to reductions in spring and summer runoffs. Changes in climate could affect water supplies to a range of users, from farms and cities to hydropower plants, fish, wildlife and recreation, the report said.

Western states are growing faster than the rest of the country, with some of the fastest growth occurring in the driest areas, such as Nevada, Arizona and Texas.

"Impacts to water are on the leading edge of global climate change," said Mike Connor, commissioner of the Bureau of Reclamation, an Interior Department agency that provides water to more than 31 million people in 17 Western states and power to 3.5 million homes.

The report "affirms the urgency of the planning we are engaged in," Connor said at a news conference Monday. "We need to take actions now to plan" for changes that are likely to occur over the next several decades.

The report addresses the expected impact of climate change on eight major rivers basins in the central and Western United States. Besides the Colorado, Rio Grande and San Joaquin, the report also looks at the Columbia, Klamath and Sacramento rivers on the West Coast; the Missouri River Basin in the Northwest and Great Plains; and the Truckee River Basin in California and Nevada.

Reductions in spring and summer runoffs could lead to a drop in water supply in 6 of the 8 basins, the report said.

Due to early snowmelt and relatively higher winter rains from warmer conditions, all but the Colorado basin could become more vulnerable to floods, the report said.

Aiguo Dai, a climate scientist with the National Center for Atmospheric Research in Boulder, Colo., said the report echoes predictions he and other researchers have made that climate change would reduce stream flow rates in Western U.S. rivers. But he said computer models used to assess global trends would not be helpful for small river basins such as the Klamath or Upper Rio Grande.

Sen. Jeff Bingaman, D-N.M., said the report did "a solid job" cataloguing Interior's efforts to respond to climate change. Bingaman, chairman of the Senate Energy and Natural Resources Committee, sponsored a 2009 law that aims to improve water management in the West and increase analysis of water-related data. The report released Monday was prepared in response to the Secure Water Act.

"Faced with forecasts of decreased stream flows and increased temperatures, it's more important than ever for communities to actively plan for changing conditions," Bingaman said. "In arid environments like New Mexico, every drop counts, and conservation and efficient water use are essential. Having tools available to accurately monitor existing water supplies, and to accurately predict future scenarios, can provide more certainty to water users and help decrease tensions."