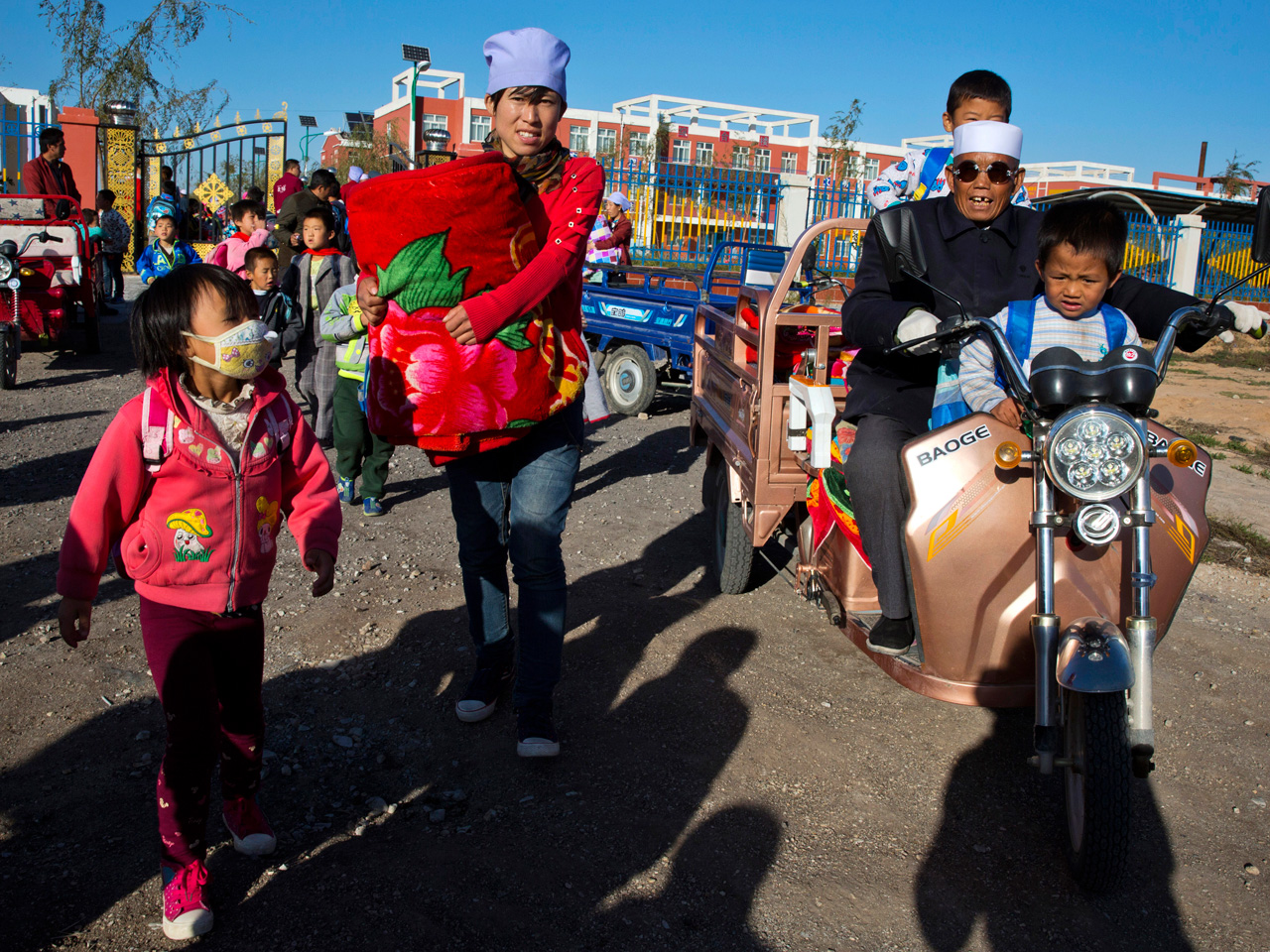 NEW DELHI - Farmer Ajmad Miyah has given up on ever settling down again. Three years after the sea swallowed his home on the Bangladeshi coast, he still has no property or possessions, and survives by tilling other people's fields in exchange for food.

"I've accepted that this is reality," the lean, 36-year-old Miyah said in the island district of Bhola, where the Meghna River spills into the Bay of Bengal. "My house will always be temporary now, like me on this Earth."

At least 19.3 million people worldwide were driven from their homes by natural disasters last year - 90 percent of which were related to weather events, according to the Geneva-based Internal Displacement Monitoring Center.

Most have stayed within their own countries, including millions displaced in the South Asian delta nation of Bangladesh. But as their numbers rise, more will feel compelled to cross international borders in search of safe haven. They could end up in a state of a legal limbo with no rights or guaranteed help.

A study in November suggested 470 million to 760 million people worldwide could lose their land to rising seas in this century if global warming is allowed to continue unchecked. The study, by the nonprofit research and news organization Climate Central, looked at global population data and sea rise projections.

Some countries like Bangladesh and the Philippines stand to lose large portions of land; some small island nations like the Marshall Islands or the Maldives could effectively disappear.

The U.S. Department of Defense has called climate change "an urgent and growing threat to our national security, contributing to increased natural disasters, refugee flows, and conflicts over basic resources such as food and water," according to a report this year.

Yet climate change does not make one a refugee, a designation for people forced to leave their home countries because of war, persecution or other violence. Someone seeking refuge from environmental disaster cannot apply for refugee status, lacks protection under the U.N. High Convention for Refugees and can be sent back to their countries of origin without question at any time.

The issue may remain unresolved through the two-week summit in Paris, aimed at hammering out a new treaty to limit global warming and deal with its effects. The U.S. is among the countries that oppose addressing migration issues in the treaty.

"This is actually becoming a fast-developing disaster," said Harjeet Singh, the international policy manager for the advocacy group Action Aid International. "The world is still not talking enough about the climate migration that is going to happen."

Carlon Zedkaia doubts his 11-year-old daughter will be able to remain in their home in the Marshall Islands, a cluster of coral atolls near the equator in the Pacific that was flooded this year by an extreme high tide.

Some of his neighbors have already left for Arkansas, taking advantage of a three-decade-old agreement allowing Marshallese to live, work and seek education in the landlocked U.S. state. Most vulnerable countries, however, have no such safety net.

New Zealand deported a man back to the tiny South Pacific island nation of Kiribati earlier this year after its Supreme Court dismissed his appeal - the world's first - for asylum as a climate refugee.

Some in vulnerable countries fear they could face the same hostile reception that Syrian war refugees have received from some countries.

"What's happening now in Europe with all these refugees will be a small thing compared to what will happen when climate change takes effect," Marshall Islands President Christopher Loeak told The Associated Press in his nation's capital of Majuro.

Yet, many of them believe rich nations should shoulder most of the responsibility.

"The U.N. protocol on refugees has to be revised, and responsibility for climate change migrants has to be taken by the developed countries, who are responsible for climate emissions," said Rezaul Karim Chowdhury, head of a Bangladeshi organization that aims to help people affected by climate change called COAST. "This is a matter of these countries' survival."

Bangladesh is considered one of the world's most vulnerable countries to climate change. Scientists have projected seas will rise an average of around 1 meter (3 feet) this century. But just a 65-centimeter (26-inch) rise would swallow some 40 percent of the country's productive land, according to World Bank experts helping the country devise ways to cope with this change.

Yet, Bangladesh has no specific plan for dealing with its own people displaced by climate-related disasters, other than offering them temporary shelter. Many have fled to Dhaka's overcrowded slums, living precariously on menial work. Others live marginal lives at the water's edge, unsure of where they can go.

They get no benefit from funds intended to help people cope with global warming, which usually can't be blamed for any particular weather-related disaster, though it is expected to make weather patterns overall more unpredictable, rainfall more erratic, storms and droughts more severe.

On Bangladesh's island of Kutubdia, beyond where the Meghna River empties into the sea, water is already breaking down mud dikes and pouring into villages. Shopkeeper Mohammed Farid Uddin can only point to the watery place where his home once stood. "If it continues to rise, there is no certainty where we'll have to move next," he said.

His neighbor, 67-year-old Bebula Begum, spends hours every day hauling water from a faraway groundwater pump. "Sometimes I am not able to fetch drinking water and have to use saline water," Begum said. "It's sea water all around us."

As the country becomes more crowded, incentive will grow for displaced Bangladeshis to cross the border into India. Yet New Delhi also has no plans for dealing with its own citizens displaced by climate change, let alone people from other countries.

"Something has to be done now. We are already seeing people moving," said Mariam Traore Chazalnoel, a climate change and migration expert with the Geneva-based International Organization for Migration. Industrialized countries "are beginning to understand that there is a stake for them, too."

In October, poor and developing nations known as the Group of 77 & China submitted a proposal for the Paris talks to deliver a plan for climate migrants - an effort started in 1991 when the island nation of Vanuatu suggested a global insurance scheme to compensate climate-induced losses.

Many industrialized countries, however, are wary of talk about migration or having to compensate those affected by climate change. The U.S. is leading other industrialized nations including Japan, Australia and Switzerland in opposing the inclusion of measures on migration in the hoped-for Paris treaty.

"I think what the developed countries are scared of is that millions of people are going to come and knock on their door because of climate disasters," Chazalnoel said. "But there are ways to ensure that this does not happen" - mainly by making sure countries can adapt to weather and environment changes so that "people won't actually have to move."

On the sidelines of U.N. climate talks, Cazalnoel said the first step in this direction is to have a reference to the issue of climate refugees in the climate agreement being negotiated in Paris.

Other challenges in addressing the issue include determining who would qualify as a so-called climate refugee, and what rights they might have in other countries.

"If migration is not mentioned in the Paris treaty, it's a step back but not necessarily the end of the world," said legal expert Cosmin Corendea with the United Nations University in Bonn, Germany. "This is a continuing discussion, and it will not die."

The European Union remains undecided on whether to include a provision on migration in the Paris treaty, though European Commission President Jean-Claude Juncker said in his Sept. 9 state of the union address that "Climate refugees will become a new challenge - if we do not act swiftly."

On Bangladesh's island of Kutubdia, the situation is already bleak.

"Our parents and grandparents lived a much better life," said 61-year-old Rahima Begum, now huddled temporarily in a makeshift bamboo shanty. "We had so much rice in stock ... God has taken everything away, into the sea."