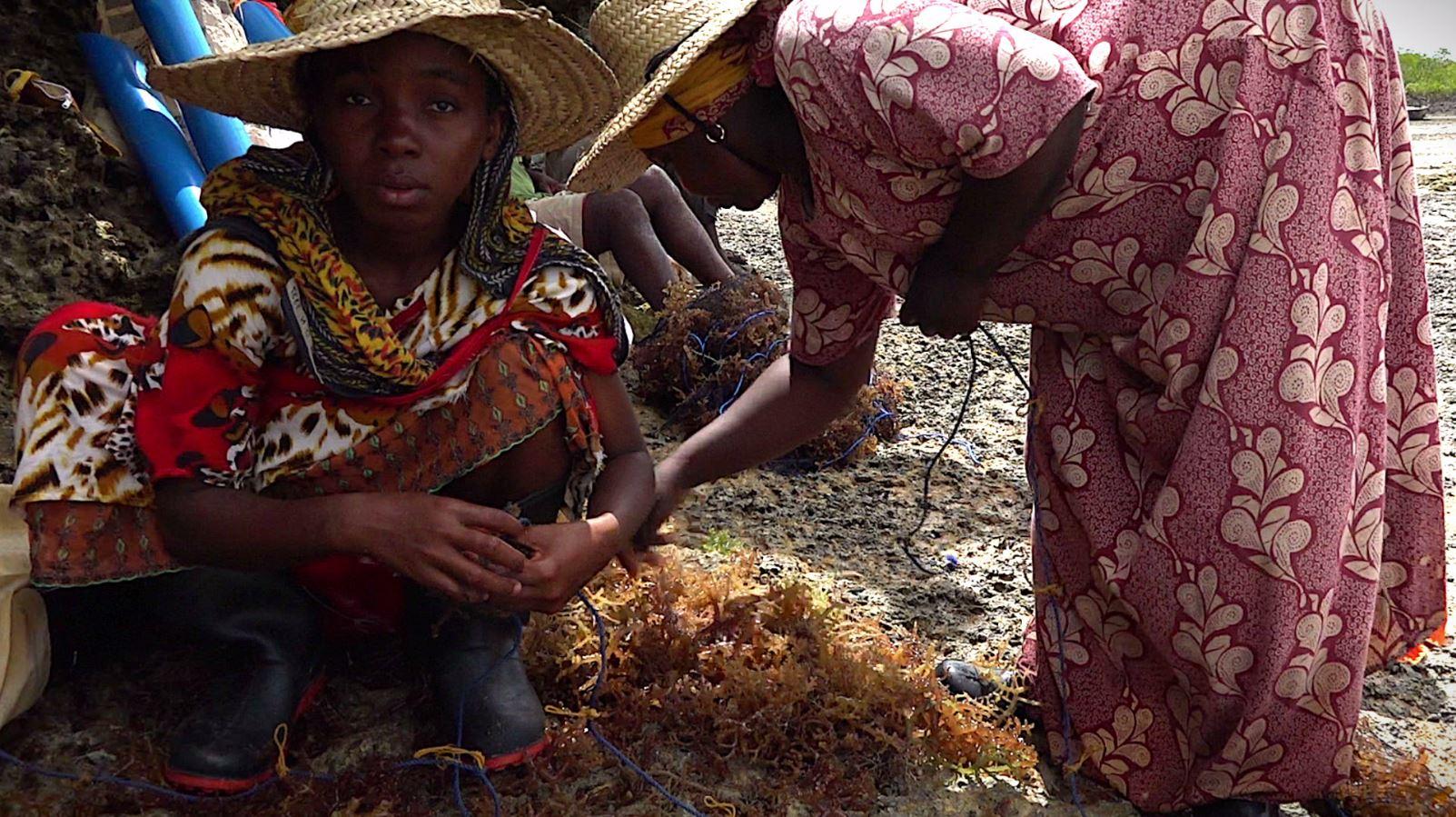 This story was supported by a grant from the Pulitzer Center on Crisis Reporting.

ZANZIBAR, Tanzania -- It's low tide in Zanzibar, a semi-autonomous archipelago off Africa's eastern coast, as a group of women in brightly colored clothing gather on the beach, and then walk into the sea. They are seaweed farmers, responsible for growing the aquatic plants that are Zanzibar's largest marine export.

Men hold most of the jobs in this conservative Muslim society, but more than 80 percent of seaweed farmers here are women. Over the past few decades, trade in seaweed has brought them unprecedented financial independence -- and the social status that comes with it.

"Seaweed farming has actually changed the position of the women in the society," explains Dr. Flower Msuya, a senior researcher at Zanzibar's Institute of Marine Sciences.

"They used to stay indoors and wait for their husbands to bring all that is required at home… But then when they started to farm, they'd go out and meet people. They'd exchange ideas," she continued. "Money is power."

But now, despite a growing global demand for seaweed, the industry in Zanzibar – and all that it has brought its rural women - is under threat. Warming sea temperatures attributed to climate change are causing massive die offs, and rural women are losing their main source of income.

THE BUSINESS OF SEAWEED

Seaweed is commercially farmed in Zanzibar primarily for an extract called carrageenan, which is used in the United States and abroad as a stabilizer and thickener in everything from toothpaste to chocolate milk. The global trade in seaweed harvested for carrageenan was worth $1 billion in 2015, according to the Food and Agriculture Organization (FAO), and Zanzibar is one of the world's top producers.

When the first commercial farms were set up on the archipelago in the late 1980s, they were in the shallow waters by the beach, where conditions for growth were optimal. For cultural reasons, the shallows in Zanzibar were considered women's spaces. The deep sea, however, where men would go to fish, was a no-go zone for women. The slow pace of seaweed farming also lessened its appeal for men, who were used to receiving a daily paycheck.

"There was even some funny joke that if they find the men there growing seaweed they say, 'Look (at) that guy, that is a women's activity, not for (a) man,'" said Makame Salim, who works for a local seaweed export company.

Seaweed farming, therefore, fell to women, who had previously depended entirely on their husbands for financial support. As Zanzibar's industry grew, so did the profits for its female farmers. Within a decade, rural Zanzibari women were taking home significant sums of money and had become breadwinners in their families.

"I don't depend on anyone, including my husband. Whatever I want, I can do it," she said.

In 2001, crops began to fail. The most valuable species of seaweed, Cottonii, was suddenly struggling to grow, and algae blooms choked plants that did manage to thrive. Zanzibar's production of Cottonii began to drop radically; by 2015, it had fallen by a massive 94 percent.

"Climate change is not only an environmental issue, it's an economic issue," said Dr. Islam Salum, of Zanzibar's Ministry of Agriculture. "We have to approach it very carefully and make sure we can adapt."

What the plants needed to grow were cooler waters, which Zanzibar had – further from shore. One challenge facing deep water farming was physical; stronger currents would break up the plants before they had a chance to develop.  But another challenge was to the farmers themselves. Many of the female farmers can't swim.

Dr. Msuya began looking for a solution to save Zanzibar's struggling seaweed industry -- and women's place in it.

A technology used in Brazil offered hope. Rather than the pegs and ropes used in shallow waters, the Brazilians use tubular nets to surround the plants in stronger currents, so they don't break off or float away.

Adapting the nets to incorporate local materials, Dr, Msuya began working with female seaweed farmers in the small village of Muungoni, one of the only locations on Zanzibar's main island that still had enough Cottonii left after the die offs to run her experiment.

The women were given net-making lessons, life jackets, access to a small boat, and a male helper to drive it and dive into the sea to plant and gather the crops. Over two years, the pilot project produced good yields, and women, like Maryam Mwazi, have continued to profit from seaweed.

Dr. Msuya hopes to continue to develop her deep water farming technique so it can be rolled out across the entire Western Indian Ocean.

"We have the women losing their crop, losing their income," she told CBS News. "I really feel I am fighting for gender equality."

Ali Sultan contributed to this report.

California rations water amid its worst drought in 1,200 years
More
Thanks for reading CBS NEWS.
Create your free account or log in
for more features.
View CBS News In
CBS News App Open
Chrome Safari Continue
Be the first to know
Get browser notifications for breaking news, live events, and exclusive reporting.