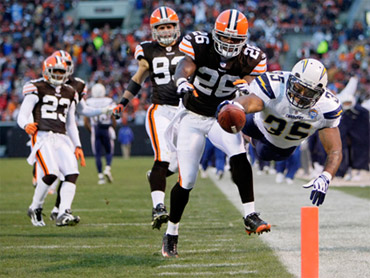 (AP Photo/Mark Duncan)
It has unemployment problems and bad weather, high taxes and corrupt public officials, painful commute times and, for the most part, pretty bad sports teams. All of those factors (and more) combine to make Cleveland, Ohio the most miserable city in America.

Forbes release its annual rankings of metropolitan misery Thursday, with Cleveland taking the top – or maybe bottom – spot out of the largest 200 metro areas in the U.S. The magazine takes a number of factors into consideration when compiling their list: unemployment rates, taxes (sales and income), commutes, violent crime, weather, pollution, public corruption and the performances of professional sports teams.

Cleveland's performance was bad across the board, as it was the only city to rank in the bottom half of every category.

By contrast, Boulder, Colo., ranks as the happiest place in the country, according to the Gallup-Healthways Well-Being Index. The survey was based on interviews with more than 353,000 Americans, with questions on jobs, finances, physical and emotional health and communities.

San Jose ranked 7th overall but was the highest ranked city with a population greater than 1 million.

Back to the misery list: A lot of smaller Midwest cities get slammed in the rankings, but they're also joined by the likes of Miami, New York and Chicago.