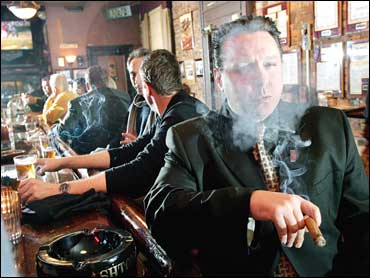 Thirty years after it began as just another quirky movement in Berkeley, Calif., the push to ban smoking in restaurants, bars and other public places has reached a national milestone.

For the first time in the nation's history, more than half of Americans live in a city or state with laws mandating that workplaces, restaurants or bars be smoke-free, according to Americans for Nonsmokers' Rights.

"The movement for smoke-free air has gone from being a California oddity to the nationwide norm," said Bronson Frick, the group's associate director. "We think 100 percent of Americans will live in smoke-free jurisdictions within a few years."

Seven states, including Ohio, and 116 communities enacted tough smoke-free laws last year, bringing the total number to 22 states and 577 municipalities, according to the group. Nevada's ban, which went into effect Dec. 8, increased the total U.S. population covered by any type of smoke-free law to 50.2 percent.

It was the most successful year for anti-smoking advocates in the U.S., said Frick, and advocates are now working with local and state officials from across the nation on how to bring the other half of the country around.

Ohio's ban, which took effect Dec. 7, has sparked a fight between operators of private clubs such as VFW halls, who believe the ban exempts them, and health officials, who say the clubs aren't exempt because they employ people who would be exposed to the smoke.

William Seagraves, state commander of the Veterans of Foreign Wars of Ohio, is urging the state to change its draft rules for enforcing the ban.

Socrates Tuch, a lawyer for the Ohio Department of Health, said although the law has a provision exempting private clubs, all employers must comply. That includes private clubs that have bartenders and wait staff, paid or unpaid, he said.

The department has set a fourth meeting for Tuesday to discuss the rules that will govern enforcement.

She said the report gave momentum to the anti-smoking front even in North Carolina — the nation's No. 1 tobacco state — and influenced Nevada voters to approve a ballot measure banning smoking at restaurants, bars that serve food, and around slot machines at supermarkets, gas stations and convenience stores. Nevada, where gambling and smoking had been assumed to go hand in hand, previously had one of the nation's least restrictive smoking laws.

"The Nevada vote shows that when people are given accurate information about the dangers of secondhand smoke, it's almost a no-brainer" they'll support smoking controls, said Burgess, founder of the anti-smoking group Smokefree Charlotte.

Not all elected officials and business owners embrace the cause. They maintain such laws drive away smoking customers and cut profits.

"There's a fear that we would lose restaurant business to nearby towns if we passed a smoking ordinance," Moline, Ill., Mayor Don Walvaert said. "Before acting, we would need real proof that cities have not experienced business losses because of smoking regulations."

In Columbia, Mo., one business owner displayed his displeasure at a new local ordinance banning smoking with a sign: "Smoking allowed until Jan. 9, City Council banning beer next, and hopefully, karaoke!"

R.J. Reynolds Tobacco Co. plans to continue to fight smoking bans at adult-only businesses because it thinks such restrictions infringe on the rights of owners and adversely affect business, spokesman David Howard said from the company's headquarters in Winston-Salem, N.C.

Amy Winterfeld, health policy analyst for the National Conference of State Legislatures based in Washington, D.C., said smoke-free legislation is pending in at least seven states.