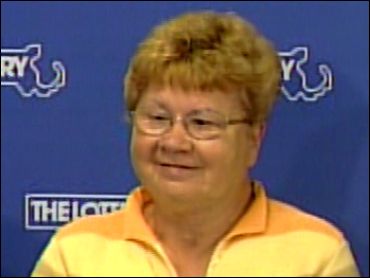 Geraldine Williams can throw away the mop, pail and featherduster.

The 67-year-old cleaning woman stepped forward Friday to claim the $294 million Mega Millions jackpot, the second-largest jackpot ever to go to a single person in North America.

Williams, who was introduced at a news conference at state lottery headquarters, said she'll take the payout in a lump sum of $117.6 million after taxes.

She said she was still stunned by her luck, a week after the numbers were drawn.

Williams recalled starring at a television as it showed the winning numbers, clutching her winning ticket and muttering, "Oh, God! Oh, God! Let it be! Let it be!"

Williams cleaned homes after retiring as a custodian at the University of Massachusetts-Lowell. Friends and family described her as a down-to-earth woman who fully intended to keep an appointment to clean a client's home this week until she was told she had to meet with financial advisers in Boston.

Williams said she told her three children about her good fortune as soon as she knew, but added hiding it from everyone else had been difficult. She kept the winning ticket at a bank before turning it in.

Williams said she plans to give the money to her children and some charities, and to travel

Williams, a grandmother of eight who moved to Lowell more than 40 years ago, said she plans to stay in the area.

"She is a wonderful person," said Mary Recko, a worker in the physical plant department at UMass-Lowell. "Everybody liked her. All of us here are so happy that it was her who won."

A neighbor of Williams called her "a bundle of energy."

"She really will be able to enjoy this. I'm so happy for her. It's unbelievable, it's very surreal," said Paula Peacock, 39.

Peacock said Williams picks up trash in their neighborhood of two- and three-family homes. She added that Williams, "takes care of people that are elderly. If I know, Gerry, she'll still want to go and take care of them."

The largest single ticket lottery jackpot winner ever in North America was Jack Whitaker of Scott Depot, W.Va., who won a Powerball jackpot of $314.9 million on Christmas Day 2002.