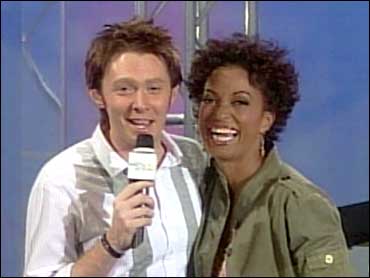 Just over a year ago, singer Clay Aiken was discovered on "American Idol." Now, he's enjoying the success of his debut album, "Measure Of A Man," which has already gone triple platinum.

Aiken participated in The Early Show Summer Concert series, singing his latest single, "I Will Carry You," along with "Invisible" and "The Way."

"It's a whirlwind dream," Aiken told co-anchor Rene Syler. "It's fun, you know. Every day's different. Every day's new and I'm excited all the time."

It is a dream he said he never thought would last this long. "I kind of went into this whole thing, thinking it could last a week, two weeks, maybe three months. It's gone a little longer than that," he said with a big smile, getting cheers from the audience.

Asked what he misses about being regular old Clay Aiken versus superstar Clay Aiken, he said, "Initially, it was really exciting. Every time you went out in public, everybody wanted an autograph and you couldn't go anywhere without people noticing you. We always used to compete when the contestants, finalists, were together: Who has more people running up to them? At this point, while it's still exciting, there are times when you don't want it to happen. You want to go shopping or you want to go walk down the street and be able to have a little anonymity. That doesn't happen. But the benefits outweigh the downside all the time."

His biggest fan is his mom, who visited the show to see her son perform.

"I think she always thought I'd do this, more so than I did," Aiken said. "I think she dreamed this for me before I did. She would probably say that she knew this all along. So it's just, for her, I think it's just what she always expected. For me, it's great to have her be able to be a part of it and to make her proud."

And with her smile, it showed she clearly is. Though interestingly, what Aiken says he ultimately wants to be is a news anchor. But for now, that will have to wait.

Aiken has also been busy recording a holiday-themed CD, to be released for Christmas this year. And he has served as spokesperson and a reader for Stories for Heroes, a series of classic children's stories narrated by celebrities and sold as an enhanced CD audiobook.

The first audiobook in the series will feature the Arthur Adventure series stories by Marc Brown and Aiken will be joined by celebrities who include Kelly Ripa, Kevin Bacon, Marcia Gay Harden, Daisy Fuentes and others. A majority of the proceeds from the sale of the audiobook will benefit The Bubel/Aiken Foundation. The Audiobook launched the week of July 5.

Aiken is also singing "Proud Of Your Boy" in the new "Alladin" DVD out in the fall.