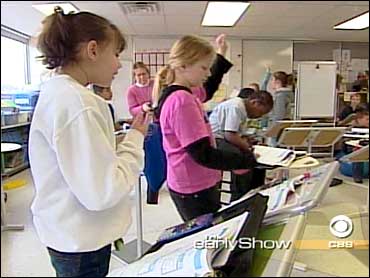 In the ongoing effort to improve children's health and education in this country, a school in Rochester, Minn., has entered into a brave new world.

As part of a unique experiment, the school has removed the chairs from its classrooms. And, as CBS News correspondent Cynthia Bowers reported for The Early Show, that means making use of equipment in new ways.

Spelling tests are given on iPods, math problems are solved at an easel, and kids can sit wherever they want — or not at all. The experiment is part of a Mayo Clinic study to see if letting kids move around in class will make them healthier.

The theory is that traditional classroom settings with desks and chairs confine children's movement and is one of the factors explaining why 45 percent of American children are overweight. It's a problem that threatens to make their generation the first one ever with a shorter life expectancy than their parents.

"It's so terrifying that it's beholden on us as parents to say what are we going to do about it," said Dr. James Levine, a scientist at the Mayor Clinic. "Are we really going to sit back and watch this happen to our children? No. I've got children. That's why I'm doing this."

Levine designed the chair-free experiment, based on the premise that forcing kids to sit still creates inactive, overweight children. By changing the environment, he believes activity will increase and weight will drop.

The children's teachers say that, yes, the students are moving around more — but they also seem to be learning more.

"I've seen kids focus more in math just because they can shift their bodies a little bit," said Phil Rynearson, a teacher at the school.

Even the children agree that they're paying more attention.

"We have more freedom and so we don't have to always sit because sometimes it gets tiring sitting," said Alicia Karls, a fifth grader.

The study has been such a success that it's been expanded from two weeks until the end of the year and the district hopes to roll out even more of what some are calling "classrooms of the future."

Saved By His Daughter's Heart