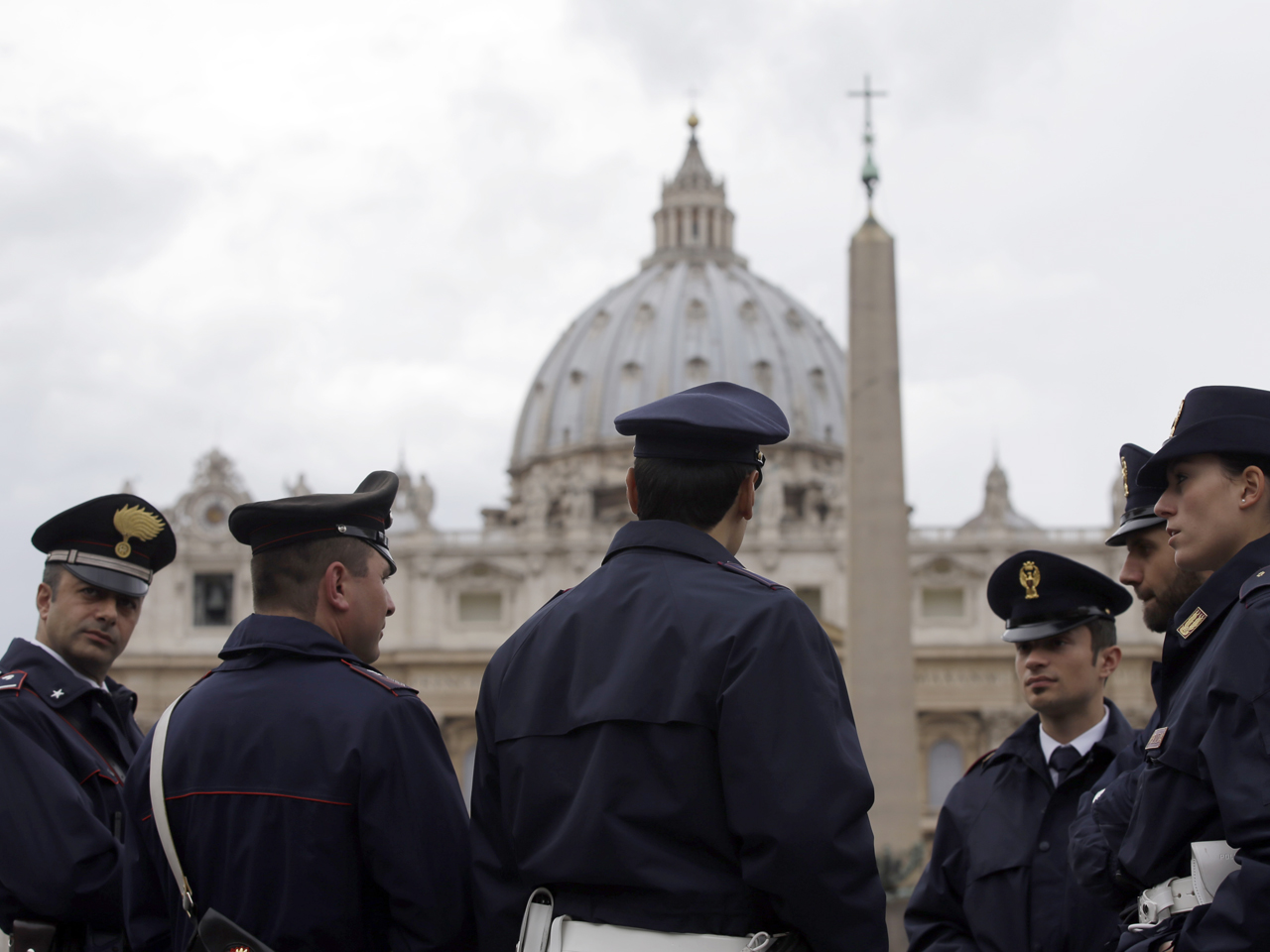 ROME You're expecting hundreds of thousands of guests. You don't know where they're coming from, or when they'll arrive. You don't even know the date of the celebration.

And heaven only knows the name of the man being feted.

Planning for the moment when the next pope is proclaimed to the world, and for the installation ceremony a few days later, is a big-time guessing game. And that adds up to an ungodly logistical headache for the city of Rome.

When white smoke pours out of the chimney atop the Sistine Chapel, throngs of Romans will drop what they're doing and race to St. Peter's Square to cheer the new pope when he steps out onto the balcony of St. Peter's Basilica. If the next pontiff hails from somewhere in Italy, thousands can be expected to pack trains to the capital.

Then there are all the foreigners flying into town to capture the historic moment — an influx that may become overwhelming if cardinals break with tradition and elect the first pope from Latin America, home to 40 percent of the world's Catholics.

A tented field hospital will go up in a square near the Vatican by the eve of the start of the conclave on Tuesday, ensuring that emergency medical treatment will be just around the corner if any pilgrim feels ill or stumbles in the rush to glimpse the new pope.

While there are no other special plans for the conclave itself, Rome authorities have a detailed game-plan for the papal installation that takes place a few days after the pope is elected. The audience for that momentous event in St. Peter's Square will include presidents, prime ministers, religious leaders and tens of thousands of pilgrims, along with the throngs of accidental tourists who happen to be in town.

Police helicopters will whirl overhead. Thousands of extra police will be summoned to duty to keep streets safe and unclogged. Officers on motorized rubber dinghies will glide down the Tiber, ready to dive into the river's murky waters to pick out anything suspicious. Bomb-sniffing dogs will poke their noses down manholes and trash bins in security sweeps along the routes that both VIPs and faithful will cover en route to the square.

As soon as the installation date is known, some 500 Civil Protection volunteers, many of them ready to hop on Segways, will receive phone calls to spring into action. They know the drill for the big day: They'll report to Rome's main train station and the subway stop closest to the Vatican before dawn, helping like good shepherds to channel the flock along designated streets, closed to traffic, that lead to St. Peter's Square.

"Not even the Vatican knows how big the crowd will be," said Mario Vallorosi, who heads the Rome office of the government's Civil Protection service. "It will be affected by who (the pope) is. If he's a Latin American, he will draw huge crowds." Conservative crowd estimates, he told The Associated Press, run between 200,000 and 300,000.

Since Benedict XVI gave two-week's notice last month for his resignation — the first in 600 years — there have been a few `'trial runs" of crowd control and security in St. Peter's Square. His final public audience drew so many people (some 150,000 people) there wasn't enough space for all in the vast cobblestone square. Surrounding streets quickly filled up with the overflow, with many faithful watching the pope's final public Vatican appearance on maxi-screens set up for them.

The Vatican's own security force, known as the gendarmerie, is in charge of the crowd inside the square and Italian police handle crowd control just outside the Vatican's boundaries. Security officers from both forces included plainclothes agents dressed up as pilgrims and tourists, listening to the chatter in the square and watching for any unusual movements.

Nearly everything went smoothly for Benedict's last public appearances, although some faithful panicked during the retired pope's penultimate Sunday blessing from his studio window, when thousands of last-minute arrivals tried to squeeze through three narrow openings through a metal fence ringing the edge of the square.

`'The biggest concern is lack of information," said Giammario Nardi, the man Rome's mayor has put in charge of hosting special events.

Nardi insisted the city is not privy to any hints from the Vatican about when the papal installation will take place. `'We're operating on predictions," he said, "on what the newspapers tell us."

Nardi spoke with The Associated Press several hours before the Vatican announced on Friday that the cardinals will start voting for Benedict's successor on Tuesday, a process that could wrap up in a day or two, or might need more time.

With a shudder, Nardi recalled how ambulances were blocked by the narrow streets of the Borgo, the neighborhood near the Vatican, when faithful couldn't squeeze into the square and clogged the streets after John Paul II's death in 2005. In those days crowds turned out day and night to pray at the Vatican and pass by his body as it lay on display in St. Peter's Basilica.

The decision to set up a field hospital this time is fruit of that bad memory, he said.

The most mentioned date for the new pope's installation Mass in St. Peter's Square is Sunday, March 17, exactly a week before Palm Sunday begins Holy Week. Nardi acknowledged that date as the city's operating `'hypothesis."

He sighed as he pondered the challenges.

`'The election of an Italian pope or a foreign pope will mean, as pilgrims go, different numbers and different types," he said, adding: `'It's not like we have a lot of time between when the white smoke puffs out and the installation."

Complicating a March 17 papal installation: It's the same date the capital is hosting the Rome Marathon.

Some 100,000 runners are expected for the race, which traditionally loops near St. Peter's Square in mid-morning. That's practically the same time huge crowds could be surging toward the Vatican for a first papal Mass.

Nardi said that the Italian government wanted to cancel the marathon, citing worries about public safety. But Rome's officials were adamant about holding it, and a compromise was clinched.

If the installation falls on marathon day, the race will go ahead but re-routed away from the Vatican. The marathon's start will also be put off until early afternoon, when presumably the new pope, pilgrims and Romans will be eating lunch. A main Rome boulevard usually on the marathon route will be fenced off so limousines can whisk VIPs straight to St. Peter's Square without dodging pedestrians — or marathon runners.

If the marathon weren't enough, March 17 is also St. Patrick's Day, with thousands of Irish rugby fans expected in Rome because Ireland plays Italy the day before in the Six Nations tournament.

For example, the city will rent several maxi-screens, at euros 20,000 ($27,000) apiece, to place in streets near the Vatican for faithful who can't fit into the square.

Rome Mayor Gianni Alemanno has taken to passing a collection plate to the central government, but so far Italy's austerity-minded caretaker premier, Mario Monti, hasn't dropped anything in.

Whether Rome could recoup some of the costs connected with the papal ceremonies from tourism, including a modest surcharge on hotel rooms, depends heavily on where the pilgrims come from, Nardi said. The number of tourists in the city rose by some 10 to 20 percent for Benedict's final audience, with many apparently from southern Germany, judging by the many pilgrims waving the flag of Benedict's native Bavaria.

Just how many people the new pope will attract to the city is an open question, depending a lot on what Nardi called "charisma."