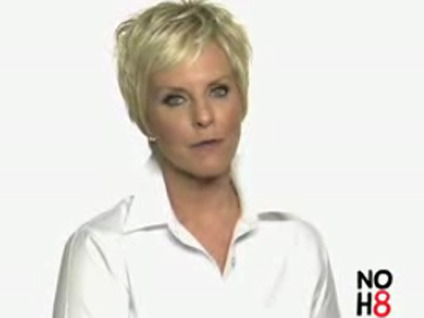 In a new video condemning anti-gay bullying, Cindy McCain, wife of former presidential candidate John McCain, spoke out against the military's "Don't Ask, Don't Tell" policy - despite the fact that her husband is currently leading the charge to filibuster its repeal in the Senate.

"Our political and religious leaders tell LGBT youth that they have no future," McCain says in the ad, made by gay rights group "NO H8," in which she is featured alongside celebrities like Denise Richards, Dave Navarro and Gene Simmons.

This isn't the first time McCain has publicly sparred with her husband over gay rights: In January 2010, McCain and her daughter, Meghan, appeared in an ad campaign for the same organization, which was formed in protest to the passage of California's Proposition 8, which banned gay marriage in the state.

Meghan McCain has long been an active supporter of gay rights, and has criticized both Republicans and Democrats for their lack of action on the issue. "We get the bad rap, as Republicans, as being against gay marriage," McCain said in a September appearance on Fox News. "But [Obama] isn't doing anything for the gay community," she added.

Senator McCain's office has not responded to a request for comment on the recent ad campaign.

UPDATE: Later, Cindy McCain appeared to change her message on "Don't Ask, Don't Tell" via Twitter: "I fully support the NOH8 campaign and all it stands for and am proud to be a part of it. But I stand by my husband's stance on DADT."