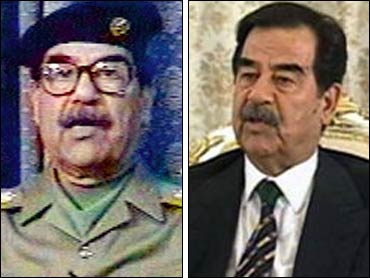 CBS National Security Correspondent David Martin reports the CIA completed its voice analysis Friday of a videotaped appearance by Saddam Hussein following an attack on his compound. The conclusion: that it is indeed the real Saddam's voice.

However, Martin says, it does not prove the Iraqi leader is alive because there's no way of telling whether the tape was made before or after the attack on his compound.

Twice since the shooting started in Iraq, the world has been shown videotape from Baghdad of a man who looks, acts, and talks like Saddam Hussein. It triggered a debate within the Bush administration over whether it is actually the man himself or just a darn good imposter.

U.S. Intelligence remains very confident that he and his two sons were inside that compound when it was struck. The compound, consisting of two buildings and an underground bunker, was badly damaged by the attack.

Several hours after the first cruise missiles struck Baghdad late Wednesday, Iraqi television showed a tape of Hussein allegedly answering the challenge. He even made reference to the date to prove it wasn't an old videotape.

But no one was certain if it was Saddam. As CBS News Correspondent Jim Stewart reports, veteran Hussein watchers were thrown by the thick glasses the heaviness in the face, and the uncharacteristically narrow shoulders.

"Either that was a really quite drawn and stressed out, puffy-faced from not getting enough sleep Saddam, or it represented a double," Post said.

Iraqi defectors have long insisted that Hussein uses doubles to throw off his enemies and maintain an air of secrecy. The look-alikes reportedly had plastic surgery and were trained in the dictator's mannerisms, including the way he walks, and even down to his facial tics.

Over the years the CIA has kept careful watch as well, from his first Gulf War days of usually wearing a uniform to the more presidential Hussein usually seen in business suits and matching ties.

A German forensic pathologist studied hundreds of Hussein photos and videotapes, concentrating on his mustache and eyebrow measurements.

Then he used computer software to locate specific points such as the tip of his nose and the cheekbone creating a face print which was compared to the Hussein photographs.

His conclusion: that there are three Hussein impersonators, all with small, distinct differences.