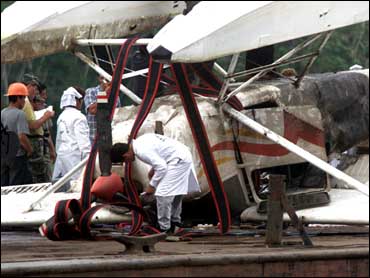 With the help of CIA spotters, the Peruvian air force shot down 15 small civilian aircraft suspected of carrying drugs, in many cases without warning and within two to three minutes of being sighted, a U.S. lawmaker said Thursday.

It was the first public disclosure of the number of planes shot down between 1995 and 2001 as part of the Airbridge Denial Program, a CIA counternarcotics effort that killed an innocent American missionary, Veronica Bowers, and her infant daughter in 2001. A State Department investigation at the time said that Peruvian fighter jets forced another 23 planes to land.

Michigan Rep. Pete Hoekstra, senior Republican on the Intelligence Committee of the House of Representatives, told The Associated Press most of the 15 planes shot down with the help of the CIA crashed in the jungle. The wreckage has not been or could not be examined to ascertain whether narcotics were aboard the aircraft.

"The Bowers could have gone in the same category if they had crashed in the jungle," Hoekstra said, speaking of the missionary family from Hoekstra's state, Michigan.

The Bowers' plane made an emergency river landing after it was hit.

Excerpts from a CIA inspector general's report released in November raised questions about whether the missionaries' plane was the only craft mistakenly suspected of drug smuggling. The CIA report said that in most of the shootdowns, pilots fired on aircraft "without being properly identified, without being given the required warnings to land, and without being given time to respond to such warnings as were given to land."

The IG report said the CIA withheld from the National Security Council, Justice Department and Congress the results of multiple investigations that documented continuous and significant violations of aircraft interception procedures created to prevent the shoot-down of planes unconnected with the drug trade. The classified report was completed in August and sent to Congress in October.

The CIA report directly contradicted the State Department's findings in 2001. The State Department at the time said the other planes were shot down only after "exhausting international procedures for interception."

CIA Director Michael Hayden is appointing a six-person board, including two current CIA officers, to determine whether disciplinary action is warranted, according to spokesman Mark Mansfield. CIA accountability boards can look at both current and former employees.

Hayden also has directed CIA's Center for the Study of Intelligence to identify lessons learned that remain relevant to CIA's current operations, as was recommended by the classified IG report.

"Director Hayden is absolutely committed to a process looking at systemic issues and accountability that is as thorough and fair as possible," Mansfield said.

Hoekstra said the report identified personnel by name who misled Congress and obstructed a Justice Department investigation into whether criminal charges should have been filed in the case. The Justice Department ultimately decided in 2005 against filing charges.

The Airbridge Denial Program was shut down after the death of Bowers and her daughter.