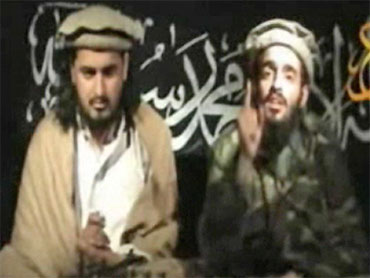 A Jordanian doctor-turned-suicide bomber and triple agent who killed 7 CIA agents and a Jordanian intelligence agent in Afghanistan on December 30, appeared in a video broadcast by a Pakistani TV station on Saturday, meeting with Pakistan's main Taliban leader, and provoking widespread reaction over his ties with militants on both sides of the Pak-Afghan border.

The privately-owned AAJ TV channel said of al-Balawi that "Jordanian and American intelligence had offered him millions of dollars in exchange for spying on the mujahideen (holy warriors). But he rejected wealth and joined the mujahideen."

The channel said he had "shared all his secrets of Jordan and American intelligence" with his fellow militants.

The video was also shown on al-Jazeera, the Arabic network.

In the recording al-Balawi noted that the Pakistani Taliban had given shelter to "emigrants" - Muslim fighters from abroad.

"We will never forget the blood of our emir Baitullah Mehsud," said al-Balawi, who wore Afghan dress on the 1 1/2 minute video. [Baitullah Mehsud, the group's longtime leader, was killed in August by a CIA missile strike.] "We will always demand revenge for him inside America and outside. It is an obligation of the emigrants who were welcomed by the emir."

The appearance of the video coincides with widespread concern over a major intelligence failure which led to the attack at the CIA's forward operating base known as Camp Chapman, in the Khost province of eastern Afghanistan. The attack was seen as a major coup for the Taliban in their ability to infiltrate some of the supposedly best-secured U.S. facilities in Afghanistan, ahead of the arrival of up to 30,000 additional troops ordered by President Obama.

Though linked, the Pakistani Taliban and the Afghan Taliban are separate movements.

But both militant movements are largely driven by Pashtuns, an ethnic group that straddles both sides of the Afghan-Pakistan border and whose members easily slip back and forth between the countries.

However, after appearance of the video, western diplomats renewed warnings of the deep links between Taliban militants and al Qaeda with groups on both sides of the Afghanistan-Pakistan border.

"How can you have this guy (al-Balawi) coming easily in to the Pakistani side of the border and having himself filmed with the most notorious gentleman on Pakistan's territory, unless the links are very, very close?" said a western diplomat who spoke to CBS News on condition of anonymity.

The warning followed mounting concerns among western officials, notably from the U.S., who routinely urge Pakistan to further intensify its campaign beyond the attacks of the past year, targeting suspected sites belonging to Taliban militants.

A Pakistani intelligence official who also spoke to CBS News, however, rebutted claims of links between al-Balawi and Pakistan. "The video doesn't say where it was filmed, so let's not jump to conclusions just yet. As far as Hakimullah Mehsud is concerned, he is an enemy of Pakistan, so how can this Jordanian doctor be even remotely connected to anyone other than enemies of Pakistan?" said the Pakistani intelligence official.

Since President Obama announced his decision to send more troops to Afghanistan, speculation has grown in recent weeks that U.S. military pressure may grow on Pakistan as well. Last week, a Pakistani cabinet minister who spoke on the condition of anonymity to a small group of news organizations (including CBS News) said that any U.S. "incursion into Pakistani territory to hunt down terrorists will backfire because our government and our military will not be able to continue our support to the U.S." His comments echoed wider concerns among Pakistani rulers over the possibility of ground incursions inside Pakistan by Afghanistan-based U.S. troops, once the surge is completed.