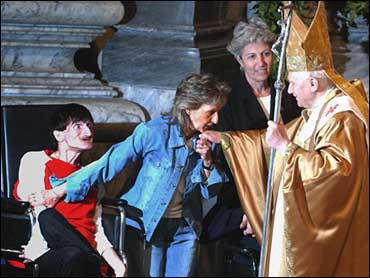 Pope Benedict XVI pledged on Saturday to resist attempts to water down Vatican teaching, indicating he will uphold Pope John Paul II's unwavering stands against abortion and euthanasia and will work to guarantee obedience to Church doctrine.

On Friday, Jesuit officials announced the editor of the Jesuit weekly America is leaving the magazine after the Vatican received complaints about articles he published on touchy issues such as same-sex marriages and stem cell research.

Benedict said on Saturday that the pope "must not proclaim his own ideas, but ever link himself and the Church to obedience to the word of God, when faced with all attempts of adaptation or of watering down, as with all opportunism."

Jesuit officials in Rome and the United States, who spoke on condition they not be identified, said some American bishops had contacted the Vatican's Congregation for the Doctrine of the Faith about articles in America over the years that had presented both sides of controversies over sensitive church issues.

The Vatican has had a sometimes tense relationship with the Jesuits, some of whose members in the past have questioned papal pronouncements on birth control, priestly celibacy and the ban on women priests.

The magazine had made a point of publishing broad points of view — including some that clashed with church teaching — irking some Catholics in the United States and Rome, the officials said.

Some of the hot-button issues included gay priests, stem-cell research, whether Catholic politicians can be denied communion if they support abortion rights, and same-sex unions.

The magazine also wrote about a Vatican document that outlined the idea that divine truth is most fully revealed in Christianity and the Catholic Church in particular.

The document "Dominus Iesus" was issued in 2000 by the Congregation of the Doctrine of the Faith — the office that was headed by German Cardinal Joseph Ratzinger before he became Pope Benedict XVI last month.

Critics complained the document could set back Church efforts to reach out to other Christians and believers outside the Church.

In Spain, the bishops' remarks about the new gay rights law, which echoed the Vatican disapproval of homosexuals, have triggered protests from gay groups as well as politicians.

"It's unacceptable," Socialist parliamentary deputy Diego Lopez Garrido said. "A democratic, secular state cannot accept that its powers are substituted by decisions from bodies that do not have legislative or executive powers according to the Constitution".

The bishops' position echoes the Vatican disapproval of homosexuality and of several Spanish conservative mayors who have already said they would refuse to preside over homosexual weddings.