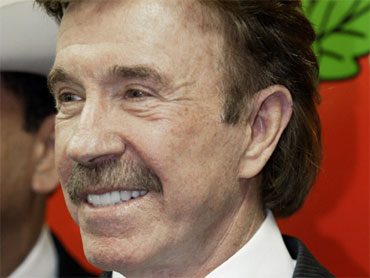 The actor and martial-arts expert was named an honorary member of the elite Texas law enforcement force Thursday by Texas Gov. Rick Perry, a nod to the television character that enshrined Norris as the ultimate tough guy.

Perry bestowed the rare honor on the 70-year-old action hero and executive director of "Walker, Texas Ranger" in a room packed with family, friends and real Texas Rangers at the Texas Department of Public Safety in Garland, a Dallas suburb.

The television show, in which Norris played Texas Ranger Cordell Walker, ran for nearly a decade on CBS in the 1990s. But odes to his unscathable toughness live on thanks to one-liners — "Chuck Norris doesn't do pushups, he pushes the earth down" — splashed across the Internet. He even made a cameo during the 2008 presidential campaign, joining a stern-faced GOP candidate Mike Huckabee in espousing such strength in an online video.

In 1990, Norris established a foundation to use martial arts to help children avoid the temptations of gangs and drugs. There are about 6,500 youths in the program, he said.

Perry said he and his wife, Anita, consider Norris and his wife, Gena, personal friends, as he thanked him for bringing renewed attention to Texas Rangers with his portrayal of "an iconic Ranger, a character who was observant, meticulous and honorable in every way.

"People may whisper about his super powers but the greatest power of Chuck Norris is his integrity," the governor said.

His younger brother, 59-year-old stunt coordinator and producer Aaron Norris, who supported him during his career, also received the honorary Texas Ranger designation.

"Together they helped elevate our Texas Rangers to truly mythical status," Perry said.

Luckily, there were no bad guys around Thursday. The Norris brothers, decked out in suit and ties, complete with 5-point star Ranger lapel pins were among a crowd of tall, Stetson-topped Rangers who were also acknowledged for their service.

Texas Public Safety Commission Chairman Allan Polunsky, who voted to honor the Norris brothers in October, called them "great Texans" who have worked to make "this a better society to live in."

Chuck Norris recalled that he and his brother were in Israel when they were asked to do the series. The actor said they weren't interested unless they could do it with "traditional values," adding that the Hollywood types scoffed but the show lasted for nearly nine years.

"It's been an incredible run, I wouldn't have it any other way," he said.