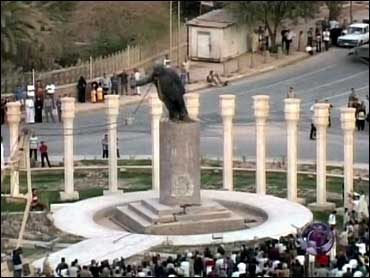 DaimlerChrysler said Monday it will cut 26,000 jobs, most of them in North America.

CBS News Business Correspondent Anthony Mason reports the cuts, part of a restructuring that is designed to pull Chrysler out of the red, amount to about 20 percent of DaimlerChrysler's global work force.

"The market is deteriorating, and our company is more so," said Chrysler group president and chief executive Dieter Zetsche.

The cuts come weeks after former Chrysler shareholders, goaded by the boasts of DaimlerChrysler's chief executive in a newspaper interview, sued the company for disguising the 1998 takeover as a merger.

As the economy slows, industries in every sector are shedding employees. Disney has decided to discontinue its unprofitable Internet division and close its Go.com Web portal. Last week, Lucent laid off 10,000, Whirlpool cut 6,000, and AOL-Time Warner trimmed 2,500. And on Monday, Freightliner, the nation's largest heavy-duty truck manufacturer, announced that it will lay off 1,085 employees and cut production of heavy trucks in half.

The U.S.-based Chrysler unit lost $512 million in the third quarter, its first operating loss in nine years, and the company's stock price has been cut in half since its post-merger high. Losses in the fourth quarter reportedly could amount to $1.3 billion.

Many senior DaimlerChrysler executives retired, quit or were forced out since the 1998 merger, a process capped by the installation of German Zetsche as chief executive in November.

The restructuring plan calls for six manufacturing plants to be idled through 2002. Chrysler said it expects a large part of the job cutting to be done through retirement programs, achieved within the framework of existing union contracts.

"These decisions are absolutely necessary to be kept competitive and in fact to survive," Zetsche said at a news conference Monday. "They must be made as soon as possible to take control of costs and end uncertainty that many people are feeling. No one wants this to happen."

The cutbacks will be made across the board, he said, with the exception of product engineering. To protect the company's ability to generate new models, only 10 percent of that department will be slashed, according to Zetsche

Billionaire investor Kirk Kerkorian has filed a $9 billion lawsuit against DaimlerChrysler, charging Chairman Juergen Schrempp tricked shareholders into thinking the union was a merger of equals, not a takeover.

The suit was fueled by Schrempp's remarks to the Financial Times boasting about the deception.

The plan will reduce overall production capability by 15 percent.

The job cuts will be through a combination of retirements, special programs, layoffs and attrition.

Of the 26,000 jobs to be cut, all but 3,100 will come from Chrysler's workforce in the United States and Canada. About 2,600 will come from closing Mexican plants, while 500 jobs will be eliminated in South America.

Chrysler expects that three-quarters of the overall reduction will be achieved this year. Company officials would not comment on how much the automaker will save as a result of the job cuts.

Despite record U.S. industrywide vehicle sales last year, Chrysler's fortunes have worsened in the past few months as the U.S. economy slowed faster than expected.

The division has already has asked for 5 percent price cuts from Chrysler suppliers. Chrysler also plans to slash hundreds of millions of dollars in advertising and showroom subsidies to its 4,400 dealers.

Plants slated to be idled include the Toluca transmission plant in Mexico, and assembly plants in Cordoba, Argentina, and Parana, Brazil.

Production will be scaled back at plants in four states and Canada, including Detroit; Belvidere, Ill.; Toledo, Ohio; Newark, Del.; Brampton, Ontario, and two sites in Windsor, Ontario.

"The only consolation is that many people at Chrysler have faced this before and responded well," Zetsche said.

Zetsche said Chrysler will unveil its complete plan to turn around the unprofitable division on Feb. 26.

While General Motors Corp. and Ford Motor Co. have also been hurt by a slowdown in the industry, Chrysler's problems have been worse. Executives have said the company was assuming growth in prices and sales, when both have been down in recent months. The company also stumbled in launching new versions of its key Dodge and Chrysler minivans, forcing it to spend hundreds of millions of dollars on incentives.

Since the 1998 union between Daimler-Benz AG and Chrysler Corp., the German-American automaker has suffered a series of problems.

DaimlerChrysler's stock price has fallen steadily since reaching a high of $108 in January 1999. In trading on the New York Stock Exchange Monday, the company's stock was down 95 cents to $47.29.

DaimlerChrysler has insisted it has no plans to spin off or sell Chrysler, which it bought in 1998 as part of its plan to extend the company's global reach.

©MMI Viacom Internet Services Inc. All Rights Reserved. This material may not be published, broadcast, rewritten, or redistributed. MarketWatch.com, L.L.C., The Associated Press and Reuters Limited contributed to this report