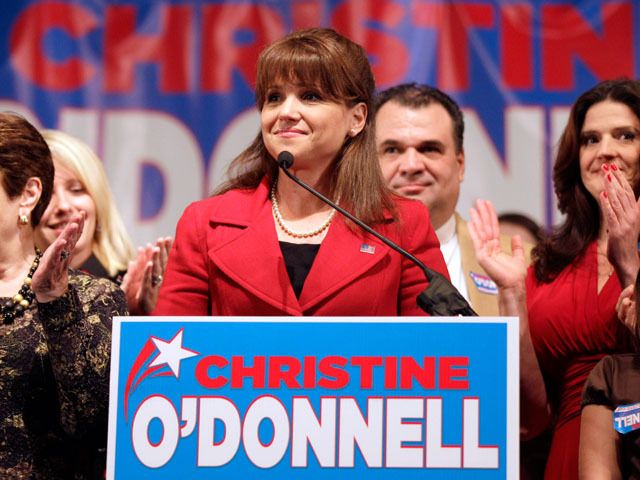 Christine O'Donnell may have lost the Delaware senate race on Nov. 2, but she hasn't lost her political celebrity status. Instead of preparing to represent her state in Washington, she was on the talk show circuit, joining Jay Leno on Wednesday's "Tonight Show".

Leno asked O'Donnell about her future plans, and if she might run for public office again.

"I don't know if I will run again. I want to keep that option open," she said.

O'Donnell said she isn't interested in returning to the talk show circuit she frequented in the past. "I did the pundit thing, and that's what got me into trouble in the first place."

She said she regretted that her controversial comments overshadowed what she was trying to convey on the campaign trail. She maintained that she was a "kid" in the '90s, when the comments were made.

''It was a ministry opportunity, more than a political statement," she said of her former talk show days.

Like her role model Sarah Palin, O'Donnell is considering a book deal and reality show offers.

"I'm not necessarily interested in a reality show," she said, unless the show dealt with issues that impact peoples' lives, such as the 30-minute ad her campaign produced. She specifically mentioned her opposition to the "death tax," the estate tax that will likely be reinstated January 21, 2011.

"Karl Rove is not going to be buying me a Maserati in the future," she said,. She said that Mike Castle, the Republican who she defeated in the Delaware Republican primary, and Karl Rove should have endorsed her, as Sarah Palin did.

"She knows the politics of personal destruction," said O'Donnell, referring to Palin and how she defended her against the GOP establishment.

It's become increasingly difficult to consider Guiliani's statement credible after the last two years Mr. Obama has endured as president.