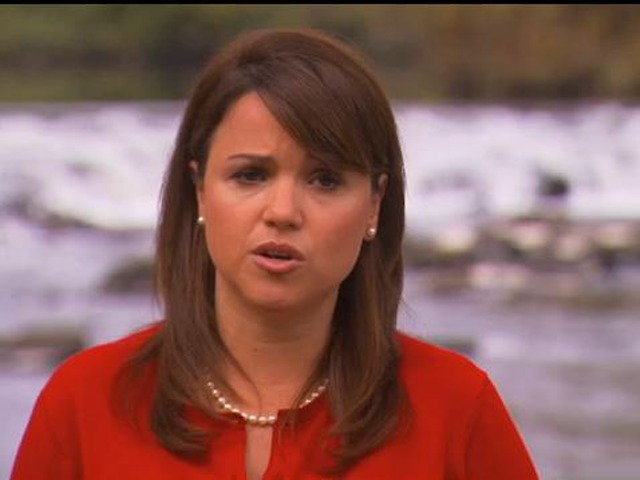 We the People of the First State from Friends of Christine O'Donnell on Vimeo.

In a 24-minute campaign spot that her campaign said was scheduled to air on Delaware's channel 28 and WBOC-TV today and tomorrow, Republican Christine O'Donnell hoped to make a final push in the Delaware Senate contest, and revamp her image in what increasingly looks like an uphill battle against her democratic rival Chris Coons. But according to the Washington Post, O'Donnell has had trouble actually getting the air on television.

Twice now - last night and this morning - the campaign told local residents to tune in at specific times for showings of the lengthy video on channel 28. Both times, the ad failed to air.

According to a press release sent out by the O'Donnell campaign at 9:24am on Monday, the ad was  scheduled to air at 10am and 3pm on November 1 and 2. But the ad did not run during its morning slot.

"This isn't our show either! We are told channel 28 'forgot' to air it...both times... even though we paid for the time slot last week," O'Donnell tweeted shortly after 10 a.m. on Monday, when the ad was supposed to run.

"Dirty politics again? I'd like to think the County run station really did just 'forget' even though we reminded them this morning," O'Donnell tweeted shortly thereafter.

Channel 28 producer Tim Qualls later said the network didn't air the program because the O'Donnell campaign sent them the  video several hours after expected, and that he had not yet received payment for it, Politico reports.

"It was all them -- nobody forgot or anything else...I'm about ready to throw a lawsuit against her," Qualls said, adding that "I didn't receive a check til about 30 minutes ago."

The O'Donnell campaign released a statement explaining the situation, but  the events described differed from Qualls' account:

"The half-hour long special from the O'Donnell campaign was not aired as scheduled on Sunday night and Monday morning," the statement said. "Delaware 28 Executive Producer Tim Qualls explained to the campaign that he was out of the area for the weekend because of a family illness, and was apparently unaware of the campaign's transaction last Friday between a local third-party buyer and Channel 28 employees."

The statement then went on to say that Qualls was being "incredibly cooperative now that he finally understands the situation," and that the O'Donnell team was "sincerely sorry for any misunderstanding that has transpired and that may have added stress to his family situation."

In the campaign spot, which features testimonials from the likes of small business owners and Michael Steele, O'Donnell rails against taxes and health care reform, and warns prospective voters that "the government and the bureaucrats have no business coming in the examination room - coming between you and your doctor."

O'Donnell also attempts, seemingly, to downplay the attacks on her character and questions about her ethical and experiential credibility that have in many ways defined her campaign.

"We went from fielding a couple hundred calls a day...to, overnight, fielding thousands of calls," O'Donnell says in the ad. "We were prepared for a transition to the general election, but not to the magnitude of which this campaign exploded...We had to scurry. No doubt we had to scurry."

"And there's no doubt that it was a disadvantage because what happened was, suddenly, you know, we had reporters from Belgium and you know Germany and England showing up, and everybody wanted to know: Who is Christine O'Donnell," she continued. "So what happened, unfortunately, is while we were still reassessing and regrouping and putting our team together, the mainstream media was creating this mischaracterization of who I am - who Christine O'Donnell is."

"It certainly created a disadvantage for us," O'Donnell added.

O'Donnell spokesman Doug Sachtleben said the advertisement, which will air again this afternoon, aimed to "[take] viewers past the filters of the mainstream media and gives a powerful look at a candidate who understands the struggles and opportunities that Delaware families are facing."

"Delawareans are flocking to the O'Donnell campaign because Christine is connecting with voters," Sachtleben said.

O'Donnell has led a controversial and highly-publicized campaign, but she is currently a long-shot to win the Senate seat formerly held by Vice President Joe Biden: CBS News currently rates the race a probable win for Coons, and the most generous recent polls put O'Donnell down by at least 10 points.