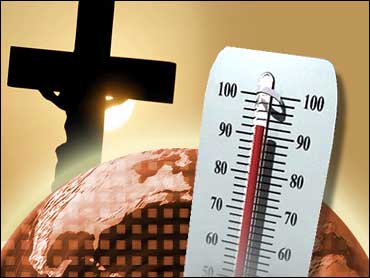 A group of 86 evangelical Christians began a campaign Wednesday that links their faith with an attempt to fight global warming.

The leaders, who face opposition from some conservative evangelicals, want the U.S. government to pass legislation requiring the reduction of carbon dioxide emissions from the burning of fossil fuels.

The group said Christians, and the U.S. government, have a responsibility to cut emissions of carbon dioxide, methane and other gases that trap heat in the atmosphere like a greenhouse. Many scientists believe these gases have intensified recent hurricanes, heat waves, disease outbreaks and droughts.

Evangelicals are an important part of the Republican Party, and while the group has begun talks with several Republican lawmakers, they say they have not discussed the matter with President Bush.

The president, who is strongly religious, opposes the Kyoto climate-change accord on the grounds it would damage the economy and does not require developing countries to also make cuts. The United States is responsible for a quarter of the world's greenhouse gases.

The group's call for political action will be backed by advertisements in The New York Times and other publications, and by television and radio commercials.

"We want to engage Americans," said Rev. Jim Ball, the publisher of Creation Care magazine. "We feel that as evangelical leaders our responsibility here is in the United States."

The Rev. Leith Anderson, a former president of the National Association of Evangelicals, said the group's effort marked an important change in the evangelical community, where many are realizing that some issues, such as global warming, AIDS and other humanitarian crises, need strong government involvement. That notion runs counter to the views of certain conservatives.

"We're acknowledging the fact that our government has to take action," Anderson said.

The group's efforts have sparked criticism by other evangelicals, some of whom question the scientific evidence on global warming.

During Wednesday's news conference, a reporter asked how the group planned to persuade those evangelicals who believe the earth is merely thousands of years old to believe scientists who say global warming is a real phenomenon and made worse by humans.

Paul de Vries of the New York Divinity School answered that, "However old a person may believe the Earth is, all of us believe that it was made and it was good. Therefore, whatever we have done with it has been messing up God's creation, and we have a responsibility."