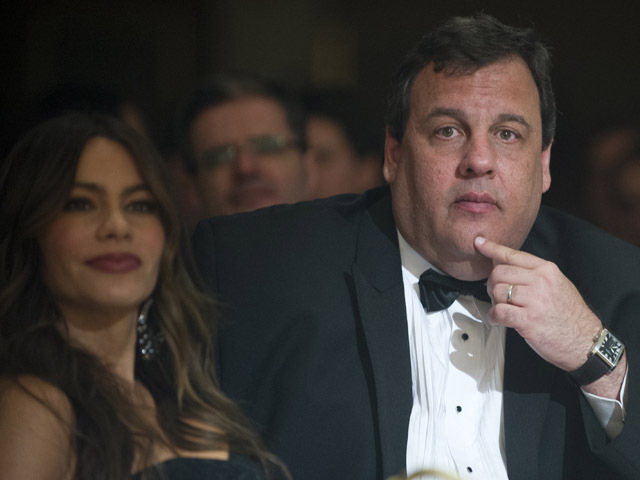 New Jersey Gov. Chris Christie, who will appear at a fundraiser in his home state this evening with Mitt Romney, has not been particularly clear about whether he would like to be his party's vice presidential nominee.

In April, Christie vowed to serve out his entire gubernatorial term, which ends in 2014. But then he told an AP History class in Plainsboro, N.J., that he might just change his mind. "He might be able to convince me," Christie said of Romney. "He's a convincing guy."

During his remarks to the students, Christie reiterated his contention that he isn't really "the vice presidential type" - someone who would be comfortable standing behind the president, clapping placidly, while the man in charge laid out an agenda. That comment echoes the prevailing argument in Washington against Christie as a No. 2: With his big personality and unapologetic swagger, according to the conventional wisdom, he would overshadow the more subdued Romney. Christie would also draw the spotlight at a time when Republicans want to keep the focus largely on President Obama and the fact that, during Mr. Obama's watch, the economy has yet to fully emerge from recession.

That perception has meant that Christie has somewhat faded from discussion of potential Romney running mates. The chattering classes instead are focused on candidates like Ohio Sen. Rob Portman, Virginia Gov. Bob McDonnell and former Minnesota Gov. Tim Pawlenty, none of whom would garner nearly the attention that Christie would. The one semi-exception is Florida Sen. Marco Rubio, but even Rubio is a veritable wallflower compared to Christie.

At one point, there was a strong case to be made for Christie as a vehicle to bring skeptical Republicans into the Romney fold. Christie was championed as a potential presidential nominee by a group of wealthy Wall Street Republicans led by billionaire venture capitalist and Home Depot co-founder Ken Langone. But Langone, who spent the past weekend at a Utah retreat for Romney's biggest donors, has long since gotten behind Romney, as have most of the wealthy Republicans who once were aggressively pushing Christie as a Romney alternative.

For that reason, according to University of Southern California politics expert and former John McCain communications director Dan Schnur, Christie's appeal as a running mate has more to do with his ability to connect with the working class than his ties to Wall Street Republicans.

"It's probably less important for New York donors than it is for rust belt construction workers," he said. "At this point, the finance types are going to give to Romney no matter who he puts on the ticket. But Christie can help him reach out to working class voters in a very effective way."

"Romney might not feel as personally comfortable with a 'bull in the China shop' on his ticket, but there probably isn't anyone else in the Republican Party more effective in reaching out to working class voters," Schnur added.

No one has ever described the relatively subdued Romney as a "bull in a China shop," and there are questions about just how comfortable he would be with the voluble Christie by his side until November. But while Romney might seem more comfortable running alongside someone like Pawlenty or Portman, he seems to get along just fine with Christie, who has campaigned with Romney multiple times and says he likes the former Massachusetts governor "a lot." And personal chemistry would not be a particularly significant issue on the campaign trail anyway, since presidential and vice presidential candidates largely campaign separately.

There is also one hidden advantage to choosing Christie: While New Jersey is likely to go blue, the popular governor, who is viewed favorably by half of New Jersey voters, gets significant coverage from news outlets in the Philadelphia media market. Choosing Christie could thus boost Romney in Pennsylvania, a state that polls suggest is very much in play.

That said, Christie remains something of a long shot as a vice presidential pick. In addition to the worries he could overshadow Romney, there are questions about potential baggage - recent revelations in the New York Times about the poor state of New Jersey halfway houses could become a campaign issue - as well as whether the somewhat loose-talking Christie could say something that could sink Romney's campaign. Christie could also cause problems for Romney with the conservative wing of the Republican Party, which remains somewhat distrustful of the formerly-moderate Massachusetts governor; it's worth noting that Rubio trounced Christie at a straw poll of possible vice presidential nominees at the Conservative Political Action Committee earlier this month.

Still, the lack of message discipline that makes Christie a risk could also draw in crucial swing voters who do not find themselves particularly enthusiastic about Romney. According to Schnur, the decision about whether to tap Christie will come down to just how well Romney is doing against Mr. Obama when he makes his choice. Schnur used a football metaphor to illustrate the point.

"If you're a few points ahead or tied, you run the ball - that's Rob Portman," he said. "If you're a couple of touchdowns behind, you put the ball in the air - that's Chris Christie."