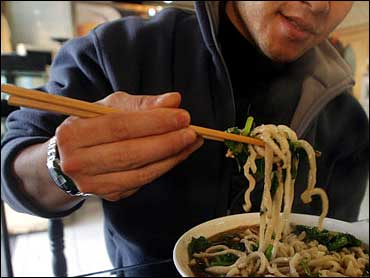 At table No. 6, a man and woman deftly snag the last kernels of corn from the plate. Nearby, a businessman lifts a clump of noodles mouthward. Niu Ming, a tiny waitress with an enormous smile, makes a rapid scissors motion with her right hand as she watches them.

"Chopsticks make your hands stronger and build your muscles," says Niu, on duty at the Old Gedou Sichuan Specialties Restaurant, which serves the peppery cuisine typical of this region of western China, known to Americans as Szechwan.

In a land where 1.3 billion people consider chopsticks, or "kuaizi," a virtual extension of the right hand, affinity for the ancient implements runs deep. That's why a new study released in the United States doesn't sit well. Its conclusion: Long-term use of chopsticks may increase the risk of arthritis.

In research presented this fall to the American College of Rheumatology, investigators studied 2,607 60-year-old residents of Beijing, the Chinese capital. They interviewed subjects about chopstick use and tested them visually and diagnostically for increased joint stress.

"This study suggests that chopsticks may play a role in the development of hand osteoarthritis," Dr. David Hunter, an assistant professor at the Boston University School of Medicine and the lead investigator, said in a statement. Hunter, who did not respond to an e-mail seeking further comment, added that the increase in risk is small.

Science is one thing, though, and culture another. It's understandable that a study questioning an age-old way of life - no matter that the research methods were sound or that five of the nine researchers have Chinese names - might touch a nerve.

"Ridiculous," snaps Dr. Cao Li, a physician at the bone department of Beijing's Xuanwu Hospital, which offers both traditional Chinese and Western medical care. "I have been here for many years, and I've never seen a single case of arthritis that could be linked to chopsticks."

Theories vary, but many say chopsticks date to primitive people who used twin twigs to pluck morsels of meat from the fire. Chinese food evolved into a bite-sized cuisine cooked with little fuel and easily grabbed by the slivers of wood - which would be difficult with most American meals.

"Chinese food is different from Western food. You have big things like steaks that you have to cut and poke at. We have bits and pieces we need to snag. The tool fits the job," says Yang Jianping, a Sichuanese who has never used a fork.

The new study comes months after chopsticks took another hit in China. This year's epidemic of severe acute respiratory syndrome got people thinking about the custom of sharing food and dipping one's saliva-saturated chopsticks into common bowls. The solution: Don't.

"Do not use chopsticks in communal food dishes. Use a serving spoon to dish food up onto your plate," the Beijing United Family Hospital and Clinics advised in its anti-SARS guidelines.

Chinese, particularly young urban ones, are engaged in a continuous process of reviewing traditions, modifying them and creating new ones. Coffee is luring many drinkers from longtime stalwart tea, and more Chinese are trading rice and dumplings for KFC and Pizza Hut.

Could this herald the dawn of a nation of diners who eat with forks and knives - and, given the imminent arrival of Taco Bell, sporks?

Unlikely, says Ma Huidi, a professor at the Institute of Chinese Culture in Beijing.

"Chinese people have been using chopsticks for more than 3,000 years," Ma says. "Younger generations tend to try new ways of life and taste new cultures. But chopsticks are an important part of Chinese food culture and will never disappear from people's lives."

Niu, the Chengdu waitress, isn't too concerned either. She says Americans might have problems with their hands after using chopsticks because "they hold them too far down." But Chinese, she's sure, needn't worry.

"My friends, none of them are using a fork or a spoon. In 200 years, we Chinese will still be using chopsticks no matter what the rest of the world is doing," Niu says.

"And," she insists, "we'll have stronger hands than anyone."