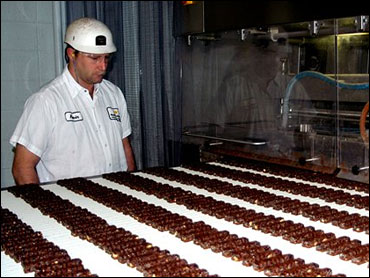 It is every chocolate lover's wish that their favorite indulgence could somehow be healthy for them. Now, chocolate makers claim they have granted that wish.

Mars Inc., maker of Milky Way, Snickers and M&M's candies, next month plans to launch nationwide a new line of products made with a dark chocolate the company claims has health benefits.

Called CocoaVia, the products are made with a kind of dark chocolate high in flavanols, an antioxidant found in cocoa beans that is thought to have a blood-thinning effect similar to aspirin and may even lower blood pressure. The snacks also are enriched with vitamins and injected with cholesterol-lowering plant sterols from soy.

But researchers are skeptical about using chocolate for its medicinal purposes and experts warn it is no substitute for a healthy diet.

"There's certainly a danger in people thinking that chocolate is a health food," Bonnie Liebman, nutrition director for the Center for Science in the Public Interest, told CBS Radio News (audio). "Chocolate is very calorie-dense. Two out of three Americans are already either overweight or obese, so the last thing we need is for people to think they should eat more chocolate ... the evidence just isn't there yet."

Recent research has not established a link between flavanols and a reduced risk of cancer or heart disease, she said.

A paper published by the American Heart Association concluded that chocolate contains chemicals, including flavanols, that have the potential to reduce heart disease. But it added researchers still do not know enough about flavanols to make dietary recommendations.

Other major chocolate companies also have started promoting the flavanol content of their dark chocolates, such as Hershey's Extra Dark, introduced last fall with highlights on its label touting its 60 percent cocoa content and high level of flavanol.

Dark chocolate, which contains more flavanols than regular chocolate, is the fastest growing segment of the $10 billion-a-year chocolate market. Hershey reports that its dark-chocolate sales have grown 11.2 percent over the past four years.

Mars created a new division, Mars Nutrition for Health & Well-Being, to distribute CocoaVia. The company has sold the CocoaVia products online for a couple years. They are already available at retail stores in 34 states, selling for nearly $1 a bar.

"Chocolate ... is the number one flavor ingredient in the world," said Jimmy Cass, Mars' vice president of marketing. "Heart health is the No. 1 concern of adults over the age of 40 in every civilized nation. Putting those two together is automatically a big idea."

The industry has been focusing on products that they believe will appeal to aging "baby boomers" — those born during the population surge after World War II. Those products include gourmet chocolates, organic chocolates and "functional" chocolates, such as CocoaVia, that may provide health benefits.

Rachael Brandeis, a national spokeswoman for the American Dietetic Association in Atlanta, said dark chocolate is a good source of flavanols, but so are other foods such as fruits, vegetables and whole grains.

"Dark chocolate can fit into a healthy diet," she said. The fat in chocolate is a type that does not raise cholesterol levels, but it can add unwanted pounds if a person overindulges, she said.

"I would say if you enjoy the taste of dark chocolate, enjoy it," she said. "But you always have to be conscious of how much you're eating."

The company has done research studies that have shown it can improve blood flow, said Mars' chief scientist Harold Schmitz.

"We believe ... there can be a significant benefit around blood pressure, but we have not conclusively proven that," he said.

The soy extract was included in the products because it has been shown to reduce cholesterol, Cass said.

More studies are needed to determine whether it is the cocoa consumption or other factors that make them healthier, Hollenberg said.

"The data assigning it to one mechanism just isn't there yet," he said.

Regardless of the research, Mars' Albany plant is filled with the fragrance of dark, warm chocolate. A seemingly endless procession of CocoaVia bars move along a conveyor belt under the scrutiny of human and electronic eyes.

The health bars pass through a machine that cools them, several that cut them to size and another that dribbles decorative swirls across the top and gives the underside a final coating of dark chocolate.

The Wellness Letter, a health and fitness newsletter published by the University of California-Berkeley, evaluated CocoaVia and advised readers to enjoy the snacks on occasion for pleasure, but not as a health food.

"CocoaVia's benefits are still unproven," the newsletter said. "Eat it only if you like it and are willing to pay the premium price."

Fruits and vegetables are still the best source of the antioxidants found in dark chocolate and they also contain vitamins, minerals, fiber and plant chemicals not found in chocolate, the newsletter said.

CocoaVia was just an expensive candy bar, concluded John Swartzberg, chairman of the newsletter's editorial board and clinical professor of health and medical science at Berkeley.