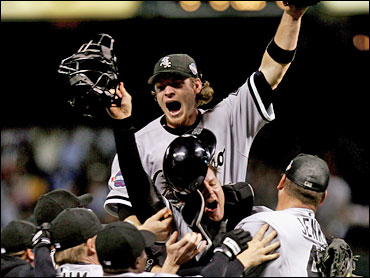 The Chicago White Sox are World Series champions again at last, and yet another epic streak of futility is not just wiped away but swept away.

After seven scoreless innings, Jermaine Dye singled home the only run in the eighth, and the White Sox beat the Houston Astros 1-0 Wednesday night to win their first title in 88 years.

Just a year ago, the same story line captivated baseball when the long-suffering Boston Red Sox swept St. Louis to capture their first title in 86 seasons.

Who's next, the Chicago Cubs, without a championship since 1908?

It was a perfect end to an unforgettable season, reports CBS News correspondent Steve Futterman, as the White Sox made a clean sweep of the hard-fought series by winning the first four games, two of them by one run, and two by two runs.

It was the third title for the White Sox, following wins in 1906 and 1917. And it was the first since "Shoeless" Joe Jackson and the "Black Sox" threw the 1919 Series against Cincinnati.

In the Windy City, where the Cubs have long been king, Chicago's South Side team for once trumped its North Side rival, no small feat for the Sox, and the city, or at least the "South Side" of the city, erupted in celebration, reports CBS News correspondent Cynthia Bowers.

"It's like Christmas, when you haven't experienced Christmas in 70, 80 years," said jubilant Chicago fan Joaquin Otto.

Owner Jerry Reinsdorf once said he'd trade all six of the Chicago Bulls' NBA titles for a single Series ring. No swap is needed now: He's got the prize he dreamed of since he was a kid growing up in Brooklyn.

"I hope this is not a dream," he said, holding the trophy under his left arm like a kid clutching his first baseball glove.

White Sox manager Ozzie Guillen said during the regular season that he might retire if his team went on to win the Series, and now he'll have to reveal that decision. He hinted after the game that he wanted a new contract.

"Now I'm going to make my money," he said playfully, looking at Reinsdorf.

Chicago's sweep, its eighth straight postseason win and 16th in 17 games overall, made it only the second team to go through the postseason 11-1 since the extra round of playoffs was added in 1995, joining the 1999 Yankees. But the White Sox fans didn't get to enjoy a single celebration in person: the division title and all three rounds of the postseason were won on the road.

"I wish we were in Chicago tonight," Reinsdorf said. "It's surreal."

From the outset of the championship run, it was hard not to think fate was trying to make it up to the Sox, reports Bowers. In game after game, questionable calls went their way, and when you throw in last minute heroics from ChiSox stars Paul Konerko and Scott Podsednik, but also from a benchwarmer named Geoff Blum, you have the makings of magic and an unforgettable season for the Sox and the city.

Houston, which finally won a pennant for the first time since it joined the National League in 1962, became the first team swept in its Series debut.

"It means a lot not only to us in the clubhouse but to the organization, the fans, the city. It's a great feeling," Dye, the series MVP, said. "We're just happy to be able to bring a championship to the city of Chicago. It's really special."

Chicago players poured out of their dugout and jumped around on the mound. Astros players were stone-faced, then came out to wave to their fans and throw caps into the seats.

Bobby Jenks got his second save, while Lidge fell to 0-2 in the Series and 0-3 in the postseason.

After Chicago's 14-inning, 7-5 win that lasted a Series-record 5 hours, 41 minutes and ended at 1:20 a.m. Wednesday, the crowd was more subdued at Minute Maid Park. The fans had to know that no team has ever overcome a 3-0 Series deficit.

Chicago stranded runners in three of the first four innings, including Podsednik after a two-out triple in the third, but Brandon Backe's changeup got stronger, and he struck out five straight — one short of the Series record — following Dye's leadoff single in the fourth.

He retired 11 batters in a row before Aaron Rowand's two-out single in the seventh, and Joe Crede followed with a drive high off the out-of-town scoreboard in the left-field fence, missing a home run by a few feet.

Houston, meanwhile, went 0-for-7 with runners in scoring position in the first six innings. The Astros stranded runners on second base in the first two innings.