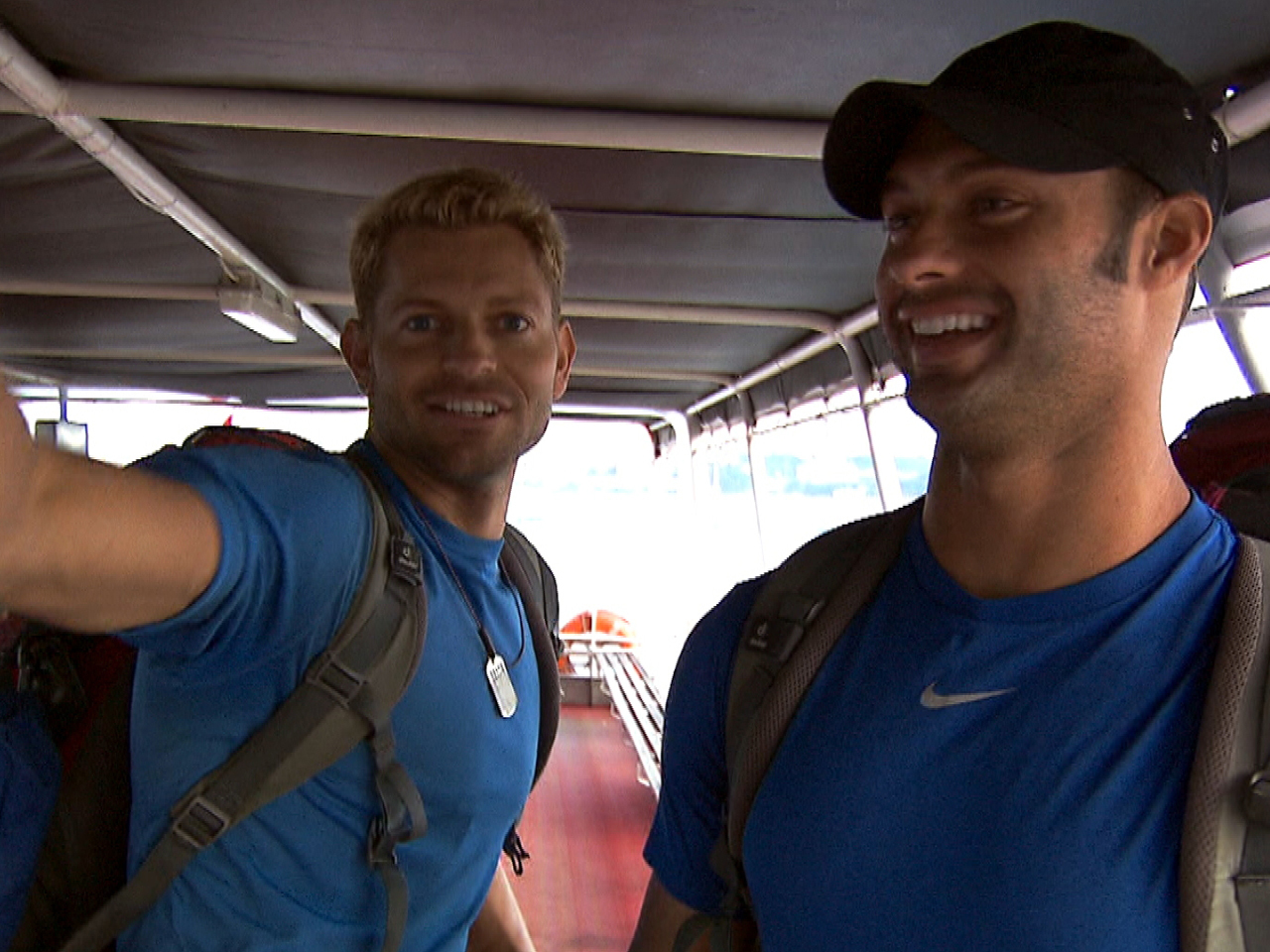 After last week's cliffhanger ending, this Sunday's episode of "The Amazing Race" will clear up some questions.

But who will finish first in the race overall? Contestants Jaymes Vaughan, 30, and James Davis, 27, know the results, but their lips are sealed.

The Chippendales stars, though, did sit down with CBSNews.com this week to chat what life's been like now that they're back on the Las Vegas strip, performing nightly at the Rio All-Suites Hotel and Casino.

With taping over, the Vaughan and Davis have returned to their days jobs, or more accurately, their night jobs. And with that, the entertainers say they plan to try to alter the impression of their Las Vegas Chippendales show. Whether that means that a reality TV series centered on the all-male revue is in the works remains to be seen.

"We want to continue to change people's perception of what we are," Vaughan said.

Which means "Magic Mike," they are not, Vaughan and Davis say.

"What's depicted in that movie isn't necessarily what we do," said Davis. "We've evolved. We've come a long way from the solo acts, the oil, the thong."

"A grown man in a thong, greased up like a Christmas turkey -- that's just not good," Vaughan chimed in.

Instead, there's singing, as well as live music involved in the show. "It's totally modernized. It's in a multi-million dollar theater," said Davis. "Don't get me wrong, you're still going to see the skin aspect of it, but I think it's done in a more tasteful way."

One thing that is sticking around, though, is the Chippendales annual calendar. Vaughan and Davis are featured in the 2013 version. When asked how they got ready for the sizzling shoot, the pals said it was easy to stay trim in time for the calendar shoot because they had just wrapped shooting for the series. "The Amazing Race" was a high-adrenaline, challenge-filled rush that often left them hungry.

Last week on "The Amazing Race," we saw the best friends attempt synchronize swimming with the women's Russian Olympic team, which proved to be a difficult task for the hunky entertainers. Vaughan had just learned how to swim shortly before filming began, and truth be told, those Olympians made it look a lot easier than it really is. But Vaughan and Davis said they wouldn't trade the experience for anything.

"When are you going to get to swim with Russian Olympic women's swimming team?" Vaughan told CBSNews.com.

"It was such an amazing adventure we had -- and with the production crew as well," Vaughan said about their time on the long-running reality TV series. "They are all there. They become like family. They're on this adventure with you."

Even when times got tough during the race around the world, the buddies were still able to find some humor.

"For us, even when we had the worst day ever, we were dying laughing, saying, 'What an amazing adventure we had today.'"

And they're watching their adventures play out for the first time -- in an edited form -- in real-time this season, just like everyone else.

"'Amazing Race' is an Emmy-award winning show for a reason," Vaughan said. "What you see is what actually happens. What is going on in the race is just so well put together. And I think to do any other reality show -- competition show -- you can't beat that."

Meanwhile, in between interviews and Vegas shows, Vaughan and David are also focused on something else very close to their hearts.

Going into the race, the guys had a mission: to help Vaughan's father, who's suffering from cancer. And their work continues.

"My Dad has a one of the worst cancers in the world and it is incurable," said Vaughan. "Medical expenses accrue. The reason we went on 'The Amazing Race' was to come back and buy a home for them, so Dad could just be there and concentrate on getting better and I would just pay their bills. But unfortunately, cancer does not wait for you to finish the race," said Vaughan.

"Things got a lot worse than I thought they were going to get -- a lot faster," he continued. "He was the only person I knew who was doing full cancer treatment and going to work 50 hours a week. It caught up to him. So now he's home and unfortunately right now, he's bedridden."

So, Vaughan and Davis decided to take matters into their own hands by trying to raise money for his care.

"The one thing James and I know how to do is to take your clothes off and to take a photo," said Vaughan.

And that's what they did. The pair just started a new website, ForgetCancerNow.com, where that photo is posted. It's also where fans can donate money to the cause.

"I feel like we were given this platform at this time for a reason," said Vaughan, who hails from Virginia. "It's my opportunity to help my family right now. It was my parents who gave me everything I needed while growing up to be able to get where I am now. My Dad is the main reason I'm in the entertainment world because whenever everyone else didn't encourage me, he said, 'You can do anything you want.' He drove me to my first audition. He's always been my No. 1 supporter and No. 1 fan. And I want to keep him around for a really long time."