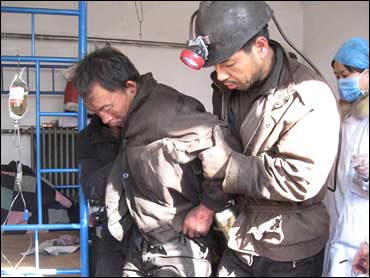 A gas blast at a coal mine in northern China killed at least 70 people Thursday, with at least 26 others still trapped, state media reported.

Another 15 miners were rescued or managed to escape after the explosion at the Rui Zhiyuan coal mine in Hongtong county near the city of Linfen in coal-rich Shanxi province, Xinhua News Agency reported.

The State Administration for Work Safety said earlier Thursday that 40 bodies had been recovered and 74 were still trapped. Another 13 had been rescued.

It was not immediately clear why the figures were different, but mine safety regulations are often loosely enforced, making it difficult to track how many people are working in a shaft. Mining companies, for example, often send in more miners than allowed in order to extract as much coal as possible to meet the country's voracious energy needs.

Xinhua said rescue workers believed the mine's managers delayed reporting the early morning accident to try to launch a rescue operation by themselves, "which magnified the number of casualties."

Telephones at the Linfen Administration for Work Safety and a local hospital rang unanswered.

The state work safety administration said the mine was properly licensed, was owned by the local government and had an annual output capacity of 210,000 tons of coal.

It said the mine's managers were being questioned by police and that its bank account had been frozen.

China's coal mining industry is the most dangerous in the world, averaging 13 deaths a day from fires, explosions and floods. In August, 181 miners died when heavy rains flooded two mines in eastern Shandong province.

Many of the accidents are blamed on mine owners who disregard safety rules and fail to invest in required ventilation, fire control and other equipment.

Meanwhile, 11 people were trapped after a roof collapsed in an iron- and gold mine in Chengde in Hebei province, also in northern China, Xinhua said.

It said the accident in the private mine happened Monday but was not reported to officials until Thursday. It did not give the fate of the miners.

Xinhua reported separately that 12 people died of gas poisoning in the Xinjiang region in northwestern China.

It said the poisoning happened in an outdoor tent that was being used by workers who were digging for licorice root, a medicinal herb used in traditional Chinese medicine.