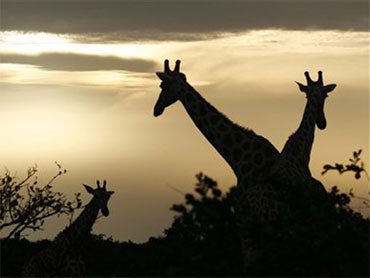 Twenty years ago, China's main concern in Africa was upending the diplomatic relations enjoyed by Taiwan with numerous Sub Saharan nations. Now its unprecedented drive to take the preeminent role in continent is being fuelled by China's vast energy, mineral and food stuff requirements.

I just returned from a visit to South Africa. Earlier in the year I travelled to Rwanda and Kenya. One trend that is impossible to ignore in Sub Saharan Africa is the growing role China is taking in the continent's affairs. Beijing is on the move in Africa -- using aid, diplomacy, weapons sales and Chinese ex pats in a bid to become the preeminent power in the region.

The anecdotal evidence is everywhere. In Kigali, the big modern Chinese embassy bristles with communication antennas and dishes. Rwanda, with its paucity of natural resources, seems a surprising place for such an installation until you factor in the country's role as the gateway to the Eastern Congo and its untold mineral wealth. It has been widely reported that China recently purchased half the farm land under cultivation in the Congo.

Roads in Nairobi, notorious for their clogged traffic circles, are being widened and repaved with large billboards telling Kenyans that the work is a gift from the people of China. The fact that the roads will ease congestion for Kenyan motorists is an afterthought to the benefactor which requires modern infrastructure to move African commodities to ports for shipment to China.

Rural South African towns that have been losing population for two decades are seeing an influx of Chinese restaurateurs and merchants. A parliamentary leader in one South African province told me he believes that many of the small businessmen who have fanned out across his remote farming and mining constituency have ties to Chinese intelligence. In neighboring Namibia, China established its first overseas military base to track its satellite and manned space flights.

The Wall Street Journal reported this week that Chinese companies are considering the purchase of interests in Nigerian oil companies, including the stakes currently held by major American companies.

China's rapid inroads into Africa are made possible by a combination of Chinese money and a willingness by Beijing to deal with some of the world's most unsavory leaders and human rights abusers like Robert Mugabe in Zimbabwe and Omar Hassan Ahmad al-Bashir in the Sudan. The inattention of the West to this important development has made China's strategic initiative that much easier.

The prospect of an Africa dominated by China means that progress in human rights and democracy in the region will stall and could be reversed. While propping up dictators may make doing business there easier, it will certainly ensure that corruption will continue to flourish and Africans will continue to be oppressed. Chinese money and weapons in the hands of those who have no problem using them to steal, stifle dissent and subjugate minority tribes is a bad thing.

The United States and the West also require fair access to the vital energy supplies and strategic minerals in Africa. American policy makers have already identified West African oil reserves as a resource that can lesson our dependence on volatile Middle Eastern and Venezuelan markets. Undue Chinese political and economic influence on the continent could deny America access to these critical sources of supply in the future.

America is in a unique position to promote free men and free markets in Africa. The United States can compete with China diplomatically and commercially in the region. The United States does not carry baggage from a colonial past as do European countries. Sub Saharan Africa is a place where America remains truly popular. President Bush's HIV/AIDS imitative was very well received. The Millennium Development Corporation is better known there than here. The United States is lead by a President of African descent, widely admired on the continent, and American pop culture rules in Africa.

To stem the Chinese tide and to give Africans the opportunity to have a better future, the United States must strongly advocate for human rights, democracy and freedom on the continent. We cannot be reticent to criticize African strongmen in forums such as the UN. The people of Africa are not looking for our apologies; they are looking for us to bolster them as they struggle against tyranny and corruption.

We should support those countries such as Botswana, Rwanda and South Africa that are committed democracies and nurture those such as Liberia that are making progress in the right direction with increased trade, investment and tourism. The budget of the Millennium Development Corporation can be increased and focused on Africa. America should remain at the forefront of funding HIV/AIDS, polio vaccination and anti-malaria programs on the continent. All of the foregoing programs have broad bipartisan support.

Further, the Africom HQ needs to move from Frankfurt to Africa. The HQ would immediately provide the host country with an economic boost. It would also allow us to work closely on the ground with the AU on peace keeping logistics and training. Having our HQ in the region will encourage friends and cause the foes of freedom to be nervous. It will also demonstrate our ability to project power in a way the Chinese still cannot.

An African renaissance requires democracy, transparency and respect for human rights. A free and transparent Africa will be a friendly place for the United States and a partner in trade and culture long into the future. An Africa dominated China is unlikely to be such a partner. The time for America to fully engage in Africa is now.

By Robert O'Brien
Special to CBSNews.com