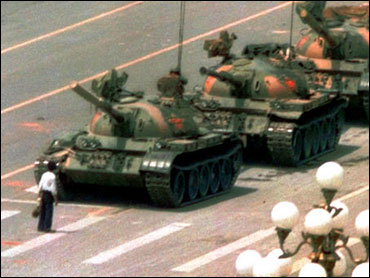 A student leader of China's 1989 pro-democracy movement who has long lived in the United States went on trial in China on Thursday, a day after U.S. President Barack Obama finished a visit that raised human rights.

Zhou Yongjun faced fraud charges at the trial in Shehong County in southwest Sichuan province, his long-time girlfriend and a friend at the courthouse told Reuters.

Zhou was a leader of the Beijing Students' Autonomous Union in the 1989 protests that ended in a bloody army-led crackdown in the streets around Beijing's Tiananmen Square. He later obtained a green card from the United States, giving him residential rights, but not full citizenship.

"I know from the lawyers that he's on trial today, but the whole process has been kept secret. This came out of the blue," Zhang Yuewei, Zhou's girlfriend, said from Los Angeles where she lives. She said Zhou's immediate family had also told her of the trial.

"Holding the trial at this time was to show the U.S. President," Zhang said in a separate email. "The Chinese government maybe believes that it has the power and cash to go up against the United States and international society."

A friend of Zhou's said she was refused entry to the courthouse, which appeared to be crowded with officials.

"They don't want any publicity about this case," said the friend, who gave her surname as Lei but asked that her full name not be reported.

Because Zhou is not a U.S. citizen, Washington has scant formal power to intervene, and Chinese authorities have no obligations to tell the United States of any developments.

In his public comments throughout his four-day visit to China, Obama raised general hopes for broader human rights in Communist Party-ruled China, but avoided raising specific cases. It was unclear, however, whether he raised such cases in his closed-door meetings with China's leaders.

Zhou, 42, was handed to Chinese police by authorities in Hong Kong, leading to his detention for nearly a year, Zhang and Hong Kong rights activists said last month.

Lacking a valid Chinese passport, Zhou travelled to Hong Kong with the intention of visiting relatives in China on a Malaysian national's passport in September last year.

He faces charges of financial fraud involving a bank in Hong Kong, but Zhang and other supporters say the charges were a pretext to punish Zhou for his years of rights activism.