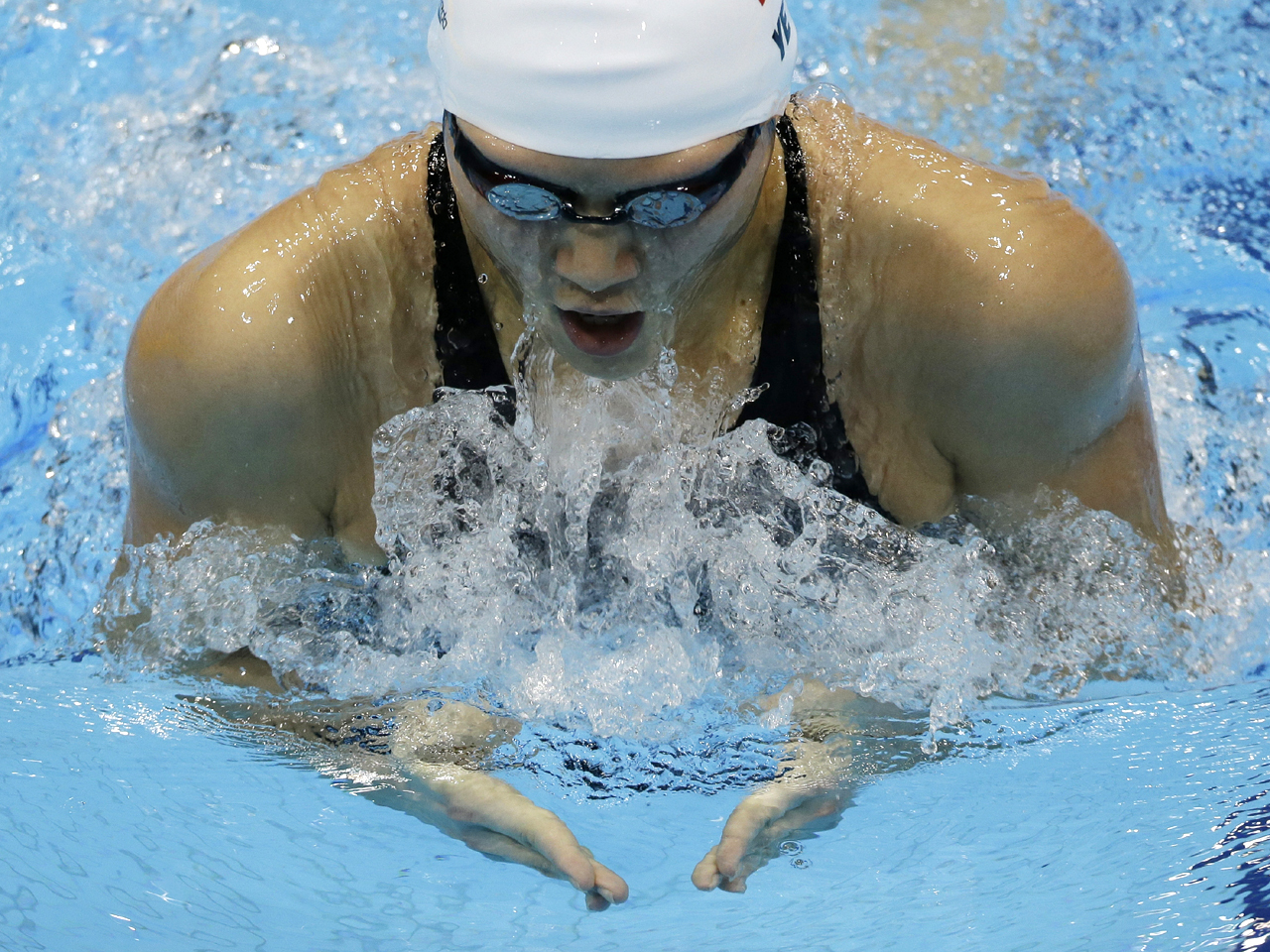 When Chinese swimmers started blowing rivals out of the water in London's Olympic pool, whispers quickly followed. Is China cheating the sport again, as it did in the 1990s, when drug-fueled, muscle-bound swimmers emerged from nowhere to beat the world? Alain Bernard, the 2008 Olympic freestyle champion from France, was among those who wondered.

"I'm for clean sport, without doping, and I truly hope the authorities in charge of this are doing their job in good conscience and really well," he said. "Unfortunately, I want to say that there is no smoke without fire. But today there is no proof to show that any Chinese has tested positive in this competition."

"Suspicion is halfway an accusation that something is wrong," Ljungqvist said. "I don't like that. I would rather have facts."

On Tuesday, the IOC again sprung to Ye's defense, saying she passed a drug test after her world record win in the 400 medley. IOC spokesman Mark Adams urged people to "get real" and said it is "very sad" if great performances cannot be applauded. IOC defends Chinese swim star Ye Shiwen amid doping speculation

Unlike the 1990s, however, there are plausible explanations this time for why China is the swimming phenomenon of the 2012 Games.

For example, Ye's astounding world record in the 400 medley, when she swam the last 50 meters faster than American Ryan Lochte did in winning the equivalent men's race, isn't solely attributable to her large hands and feet. It also is at least partly because China, which has grown to become the world's second-largest economy, now throws big checks at some of swimming's sharpest minds. China has turned to foreign trainers to get their coaching programs, expertise and methods, not only to hone its swimming stars but to make them more rounded and relaxed, too. The idea is that happy swimmers are fast swimmers.

Ye has trained in Australia with two well-recognized coaches, Ken Wood and Denis Cotterell. Wood has had a contract with the Chinese Swimming Association since 2008, and 15 of China's swimmers in London, plus five of its relay swimmers, have trained at his academy north of Brisbane, rotating through in groups for a couple of months at a time, he told The Associated Press in a phone interview.

"I get paid per month, per swimmer four times more than I do with my home swimmers," Wood said from Australia after Ye qualified comfortably fastest Monday in the 200 medley heats. China pays him bonuses for Olympic gold and for swimmers' personal bests, and he also got a bonus for Ye's 200 medley world championship win in 2011.

"China is putting a lot of money into its program and I am only too happy to work with them," he said. "The whole Chinese philosophy is that they want to be the best they can."

Not only is training overseas exposing Chinese swimmers to more sophisticated coaching, it is teaching them about life and the wider world. In Australia, they and their coaches are learning to let their hair down a bit and about themselves. For a seasoned observer of China and its state-run sport system, the worldlier Chinese swimmers performing so well in London are truly a new breed. These aren't the automatons of old, with monosyllabic stock responses about how grateful they are to their motherland and seemingly so ignorant of life outside China's government-funded medal factories with their grind of training and yet more training far from family and friends.

Sun Yang, China's first man to win an Olympic swimming gold, radiates self-assurance, spunk and zeal. The 6-foot-6 swimmer with size 45 feet roared, pounded the water with his fists, wept and remembered to thank his mom and dad — "Really great parents, they gave me so much" — after crushing defending champion Park Tae-hwan of South Korea in the 400 free. Sun is among those who have trained in Australia.

Backstroker Fu Yuanhui, a bubbly 16-year-old, turned out for her semifinal in a silly, furry, Santa Claus-type hat and a cheesy grin. Lu Ying, silver medalist behind the United States' Dana Vollmer in the 100 fly, gave a long, thoughtful answer about why Australia was such an eye-opener for her. She said she was particularly impressed by the enthusiasm of the Australian swimmers she trained with and how they balanced work and play.

"They're always having fun. They're not worrying that if they have too much fun they won't be able to move when the training gets hard. Chinese are quite particular about these things, about resting before training hard. But that isn't how they think. They think that when it's time to have fun, then you have fun," she said. "So you end up feeling that our thinking is a bit restricted too much by social conventions and taboos and that we limit ourselves and that sometimes we can't relax. Their teammates often invite them to barbecues, they eat, or their dad will often do a barbecue or breakfast and what not. And you think, 'That wouldn't happen in China."'

Foreign expertise is also compensating for weaknesses in Chinese coaching. Wood said many top coaches in China's provinces are retired swimmers. They concentrate on stroke technique, but "are not very well up on biomechanics or any of the sport science." They also drill discipline into young swimmers early on — Wood said Ye's coach in China is "very, very tough on her" — and he's been urging them to lighten up.

Wood also said the Chinese, especially the women, keep their weight down and that is the "whole secret" to their success. They come to his academy with their own chefs and shop for food in Brisbane's Chinatown.

"Fat cats don't fight; they sleep in front of the fire. And there are no fat cats in China," he said. "There's not one Chinese girl I've seen with weight on. ... That is a huge advantage for Chinese. Most of our girls, the Aussie girls, are carrying too much weight."

He said Ye's power-to-weight ratio is particularly good, and that helps explain how she was able to rip through the last 50 of her 400 IM in 28.93 seconds, compared with Lochte's 29.10. That gender-defying feat and her world record of 4 minutes, 28.43 seconds, more than any other Chinese achievement so far in London's Aquatics Centre, set tongues wagging. Lochte said he and his teammates talked about it over dinner and that "if she was there with me, she might have beat me."

"That's the one that's caused all the controversy," Wood said of that swim. Even in Australia, he is hearing muttered suspicions from London about Ye and whether China "is going back to the bad old days."

Those would include when breaststroker Yuan Yuan, a silver medalist at the 1994 world championships, was caught trying to smuggle 13 vials of banned growth hormone hidden in a thermos flask in her luggage into Australia ahead of the 1998 worlds or when seven Chinese swimmers tested positive for steroids at the 1994 Asian Games.

That decade of shame — a sports scientist at San Diego State tallied 32 Chinese swimmers caught for drug offenses in the 1990s, two of them twice — and China's subsequently victorious bid for the 2008 Olympic Games forced change and the establishment of a world-recognized anti-doping program. Still, this June the official Xinhua News Agency reported that 16-year-old Li Zhesi, who swam the last leg of China's 400 medley relay victory in world record time at the 2009 worlds, tested positive in March for EPO, a banned blood-boosting hormone.

Wood said drug testers from FINA, swimming's governing body, and the Australian Sports Anti-Doping Authority "have on many occasions" visited his academy unannounced to collect samples from the Chinese.

"They just come in out of the blue and they pick who they want," he said.

Ye, asked by the AP about the suspicions, gave what sounded like a stock answer. "We resolutely don't use and are resolutely opposed to doping," she said.

Wu Peng, who trains in Ann Arbor, Mich., and, at 25, is older than Ye, was more forthcoming.

"In the 1990s, the reputation of Chinese swimming wasn't good. There were a lot of doping problems. But it really is very different now. A lot of attention is paid to training. And despite breaking the world record, Ye Shiwen didn't come out of nowhere. Her results have steadily been improving," he said. "So I think it is down to training, not other methods."

"What they are saying is: 'Where did this girl come from? She came from nowhere,"' Wood said. "That's absolutely rubbish."

This story was written by John Leicester, an international sports columnist for The Associated Press.