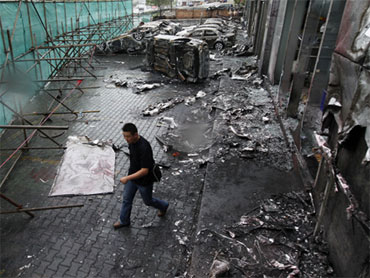 Forces arrested six suspects and seized large amounts of bomb-making materials in the raids, according to a notice posted on the Public Security Ministry Web site.

Initial investigations showed the suspects had begun making bombs following deadly ethnic rioting in Xinjiang's capital Urumqi in July, the notice said. It did not say when the arrests were made and calls to Xinjiang regional police headquarters rang unanswered.

The ministry said the gang had set up three bomb making workshops on the outskirts of the city of Aksu, about 430 miles (700 kilometers) southwest of Urumqi, and had already assembled 20 explosive devices, the ministry said.

The gang had planned to place bombs on cars, motorcycles, and people and "carry out terrorist sabotage activities," but were prevented from doing so by the timely police action, the notice said.

The names of two men described by Xinhua as the gang's ringleaders, Seyitamut Obul and Tasin Mehmut, appeared to identify them as members of the Turkic Muslim Uighur ethnic group, radicals among which have long fought Chinese rule in Xinjiang.

In the run-up to last year's Beijing Olympics, Chinese authorities announced they had foiled a series of Xinjiang-based plots to carry out terrorist attacks, including the bombing of a commercial airliner. Little hard evidence was ever presented and some critics say China exaggerates the threat from armed groups to justify repressive policies against Uighurs.

Responding to the police announcement, Dilxat Raxit, spokesman for the Germany-based World Uighur Congress, called for an independent investigation and claimed authorities in the Aksu area had rounded up 143 Uighurs for violating restrictions on fasting during the Muslim holy month of Ramadan.

The claim could not be verified and China denies violating Uighur religious rights.

Huge numbers of paramilitary troops have been called out to bolster the region's police force and on Tuesday authorities banned the transport of weapons, ammunition, explosives and radioactive goods into or within Xinjiang until Oct. 8.

Uighurs are culturally distinct from China's majority Han group who dominate life in Urumqi and positions of power, despite the fact that Uighurs make up the majority of the population in the wider region of Xinjiang.

As with Tibetans, many Uighurs resent the heavy Chinese presence in their native land and claim they were essentially independent from Beijing for much of their history.