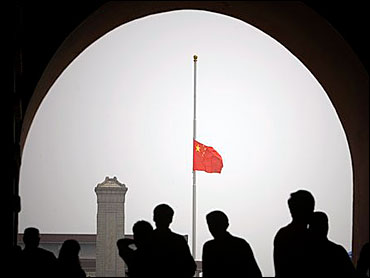 Some 14,207 companies in Sichuan province and surrounding areas were damaged by the May 12 quake and 1,387 of their employees killed, a deputy industry minister, Xi Guohua, said at a news conference.

Independent estimates have put total losses at up to $20 billion after lost future output is taken into account.

The magnitude 7.9 quake killed at least 34,000 people and officials say they expect the death toll to surpass 50,000.

Analysts say the long-term effect on China's fast-growing economy should be limited. Sichuan, in the mountainous central part of the country, is a major source of coal and natural gas, but has limited manufacturing, finance and other industries.

On Monday, China marked one week since the massive earthquake, with people observing three minutes of silence and sirens and horns wailing in memory of the dead.

Residents of three counties were still without power a week after the quake damaged generating stations and the power grid, a Cabinet spokesman, Hua Qing, said at the news conference.

Xi said Chinese phone companies were still struggling to restore service in quake areas because repair crews were hampered by landslide-clogged roads. He said one employee of state-owned China Mobile Corp. had died during reconstruction work.

Also Monday, the government said it was releasing fuel supplies from a national strategic reserve in Sichuan to prevent shortages.

The State Reserves Bureau released 44,000 barrels of fuel from the stockpile, according to the country's main planning agency, the National Development and Reform Commission. The reserve was created to insulate China against possible interruptions in foreign oil supplies.

Gasoline and diesel also will be shipped in from reserves elsewhere, the commission said.

PetroChina chairman Jiang Jiemin said last week the company was studying the possible impact of the quake on its plans to build a large refinery in Sichuan.

The government was shipping extra supplies of rice, pork, soybean oil and other food items to the area to ensure stable supplies and hold down prices, the NDRC said.

The government is "closely watching food prices," the agency said on its Web site.

More than 50,000 acres of vegetables and more than 25,000 acres of wheat were destroyed by the May 12 quake in Sichuan province, the ministry said.

Damage to irrigation systems could prevent farmers from growing rice on as much as 250,000 acres of rice paddies, the ministry said. But it said that land might be used for alternative crops while the damage is repaired.

The losses should not affect food supplies, because Sichuan was due to produce 1.5 billion birds this year, said Wei Chao'an, a deputy agriculture minister, in comments reported by the official Xinhua News Agency.

Sichuan usually supplies about 6 percent of China's grain and 5 percent of its vegetables, according to Wei.