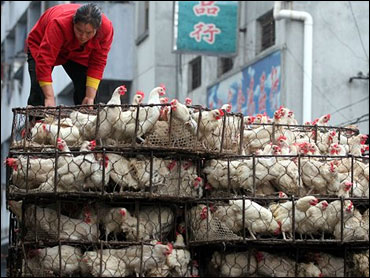 China on Friday reported its seventh and eighth bird flu outbreaks in three weeks, while Vietnam, which has suffered most of Asia's human deaths from the virus, ordered police and the military to help fight the disease.

One of the new Chinese outbreaks was in Liaoning province in the northeast, where officials say locally sold counterfeit vaccines sold might be adding to the health threat. Premier Wen Jiabao visited Liaoning this week and warned that the disease was not under control.

The outbreak, on Sunday, killed 300 chickens in Beining village near the city of Jinzhou, the Agriculture Ministry said in a report on the Web site of the Paris-based International Organization for Animal Health. It said 2.5 million birds were destroyed to contain the outbreak.

The other outbreak, in Hubei province's Jingshan County, killed 2,500 poultry and prompted authorities to destroy more than 31,000 birds, the official Xinhua News Agency said. The case, which reportedly occurred Nov. 2 and was confirmed Friday, was Hubei's first in the latest series of outbreaks.

China has reported no human cases, but experts say one is inevitable with continued outbreaks in poultry.

In Vietnam, Prime Minister Phan Van Khai called on the army and police to help with anti-flu work as new outbreaks were reported despite mounting efforts to contain the virus, state media reported Friday.

In a telegram sent to ministries and provincial governments, Khai urged local governments to "mobilize the armed forces, militiamen and university students," the Pioneer newspaper reported. It did not say what they were expected to do.

A bird flu outbreak in North Korea earlier this year forced the communist government to destroy 210,000 chickens and other poultry. No cases have been reported since then.

Stopping bird flu is "a significant matter aimed at vitalizing the nation's economy and raising the superiority of its socialist system," the television report said. "We need to rise up for this project as if (we are) one man."

The disease has killed 64 people in Asia, two-thirds of them in Vietnam.

The latest case in China brought the country's total number of outbreaks over the past month to seven.

Three of those were on farms near Jinzhou and one more near the neighboring city of Fuxin. The first case in Jinzhou on Oct. 26 prompted authorities to destroy 6 million chickens.

China earlier warned that counterfeit vaccines were being sold in Liaoning, raising the possibility that millions of chickens, ducks and other birds weren't properly inoculated. China suffers from rampant counterfeiting of food and medicines.

"And what we have now, almost certainly, we think, is sick chickens who are showing no symptoms, and that is very, very bad. They are silent carriers of the virus," a World Health Organization spokesman, Peter Cordingley, in comments broadcast Thursday by Hong Kong's Cable TV.

H5N1 first appeared in Hong Kong in 1997 but was curbed when authorities destroyed all poultry in the territory. It re-emerged in December 2003, and has recently spread from Asia to Europe.

Meanwhile, WHO was sending experts to Hunan to help investigate whether bird flu caused a 12-year-old girl's death and two illnesses in an area hit by an outbreak in poultry last month.