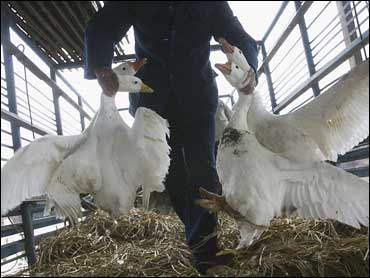 China's agriculture minister is warning of a possible "massive bird flu outbreak" as the country announced two new human cases of the H5N1 flu strain, raising to 14 the number of human infections reports since October.

"In view of the current situation, the possibility of a massive bird flu outbreak could not be ruled out," Agriculture Ministry Du Qinglin said Saturday, according to the official Xinhua News Agency. He called for agriculture authorities to be on "high alert" and to step up disease monitoring and vaccination efforts.

Outbreaks in poultry occurred last year in 32 areas throughout China, killing 163,100 chickens, ducks and other fowl, and authorities destroyed 22.6 million more birds to keep the virus from spreading, Du said in a briefing for Chinese legislators.

The latest human cases are a 9-year-old girl and a 26-year-old woman, both hospitalized in critical condition with fever and pneumonia, the Health Ministry reported.

The girl lives in the southeastern coastal province of Zhejiang and the woman is a farmer from Anhui province in the east, the Ministry said in a report carried by Xinhua.

China has reported eight deaths among its 14 human cases.

The farmer, identified only by the surname Wang, had contact with sick and dead poultry that laboratory tests showed had the H5N1 flu strain, the Health Ministry said. It said she got sick on Feb. 11.

The cause of the girl's infection was under investigation, but she visited the home of relatives whose chickens died while she was there, the ministry said. She got sick on Feb. 10.

"The two patients have been confirmed to be infected with bird flu in accordance with the standards of the World Health Organization," Xinhua said, citing the ministry.

It said people who had close contact with Wang and the girl, identified only by the surname You, have been put under medical observation but none has shown symptoms.

The H5N1 virus has devastated poultry stocks and killed at least 92 people since 2003, mostly in Asia. Fresh outbreaks have been reported in 14 countries since early February.

France's farming ministry said lab tests confirmed H5N1 in turkeys at a farm in the southeast Ain region, where thousands of the birds were found dead Thursday. The farm, which had more than 11,000 turkeys, has been sealed off and surviving birds slaughtered.

However, President Jacques Chirac sought to ease fears, insisting that eating poultry is safe and there is no reason for panic.

Chirac said there is "no danger in eating poultry and eggs" and that panic among consumers is "totally unjustified."

Outbreaks in China poultry have continued despite a mass inoculation effort that the government says has vaccinated all of the country's vast flocks of chickens, ducks and other birds.

Chinese farmers raised about 15 billion poultry, 21 percent of the world's total, in 2005, and that raising poultry is one of the main income sources for the country's farmers, Du said in the Xinhua report.

China has about 5.2 billion poultry at any one time.

In the latest poultry case, Xinhua said Saturday that 13 chickens died on a farm in the village of Jitai in Anhui, prompting authorities to destroy more than 200 birds.

Health officials say the virus probably is being spread by migratory wild birds. They say more human cases are inevitable if China can't prevent outbreaks among its poultry flocks.

Most human infections have been linked to direct contact with sick poultry.

But experts have warned that the virus could mutate into a form that could be easily transmitted between people, possibly sparking a global flu pandemic that could kill millions.

A 6-year-old boy who contracted the disease in December was discharged from a hospital this week after doctors pronounced him cured following 44 days in isolation.

The boy suffered serious lung damage but recovered, according to Xinhua.