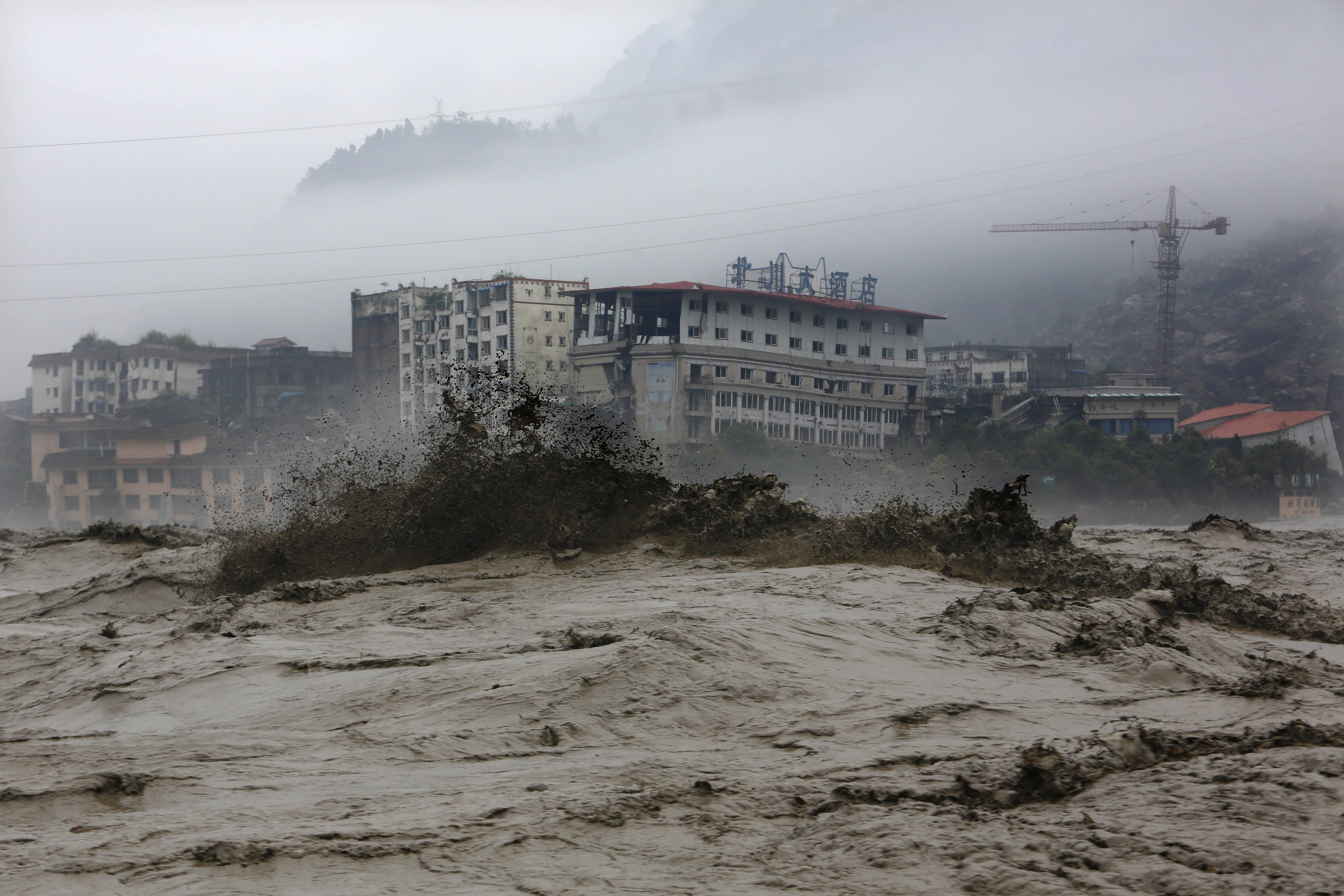 Flooding in the western province of Sichuan was the worst in 50 years for some areas, with more than 100,000 people forced to evacuate.

Nationwide, at least 1.6 million people have been affected since Sunday and thousands of homes damaged, according to the Ministry of Civil Affairs. Nearly 100 people have been left dead or missing across the country, according to reports from various provinces, though the overall tally is likely to be higher.

Many of the casualties in Sichuan were from a massive landslide that struck a scenic resort outside the city of Dujiangyan. An entire hillside collapsed onto clusters of holiday cottages where city dwellers escape summer heat, a survivor told the official Xinhua News Agency.

"The noise was like thunder and went on for two or three minutes. My first thought was that I too would be buried," Gao Quanshi, 47, was quoted as saying. Phone lines were cut, so villagers had to trek to nearby government offices to call for help, he said.

Images from the scene showed a valley filled with mud and rocks with only the tops of trees sticking through. Drenched rescuers wearing helmets and life jackets worked mostly with hand tools to prevent harming any survivors still trapped beneath.

A total of 352 tourists had been rescued from the area as of Wednesday night, Xinhua said. Overall in Sichuan, there were are least 19 dead and more than 50 missing, state media reports said.

Mudslides and flooding are common in China's mountainous areas, killing hundreds of people every year, but in some areas the current floods are already the worst in half a century. Reports said the 37 inches of rainfall that fell on Dujiangyan over 40 hours beginning on Monday was the heaviest since records began being kept in 1954.

Also in the west, more than 2,000 people were rescued after being trapped for several hours Wednesday in a highway tunnel between Dujiangyan and Wenchuan — the epicenter of the Sichuan earthquake five years ago that left 90,000 people dead or missing.

Bridges have been closed and train service suspended in some parts of the province.

In nearby Beichuan county, flooding destroyed buildings and wrecked exhibits at a memorial for earthquake victims.

The flooding also caused the collapse of an almost 50-year-old bridge in a neighboring county, sending six vehicles into the raging waters and leaving 12 people missing.

The region lies in the foothills of the Tibetan Plateau, where mountains rise sharply from the densely populated Sichuan basin. Fast-running rivers quickly overflowed their banks, flooding scores of towns and parts of the provincial capital of Chengdu, where the waters rose to the second floor and covered the tops of cars.

In Chengdu, stone bridges and brick houses along river banks were swept away, including one in which the residents were taking shelter, while others crumbled into the saturated earth already rent with fissures from the 8.9 magnitude 2008 earthquake.

In the northern province of Shanxi, meanwhile, at least 12 workers were killed Tuesday when a violent rainstorm caused the collapse of an unfinished coal mine workshop they were building.

Another three people were drowned in a car in Hebei province outside the capital, while an additional 11 people were reported dead or missing in Yunnan province, Beijing, Inner Mongolia, and Gansu province.