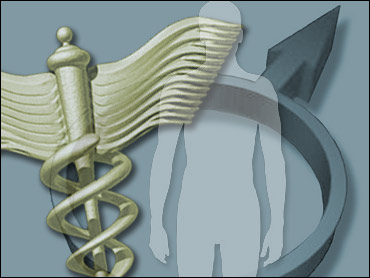 You've hard of keeping your chin up?

Well, a growing number of men are choosing to keep their chins out as much as possible -- by having chin implants -- as they try to make themselves look better, a New York plastic surgeon says.

Dr. Darrick Antell, a spokesperson for the American Society Of Plastic Surgeons, says he examined the profiles of 42 of the top CEOs on the Fortune 500 list. The results? Ninety-four percent of those he looked at had chins that were either average or above average in prominence, when compared to the general population.

In general, Antell says, plastic surgery is getting more popular among men, though nowhere near as many are having it as women. In order of popularity, men are having nose jobs, eyelid surgery, and liposuction.

On The Early Show Friday, Antell told co-anchor Maggie Rodriguez, "Oftentimes, the chin is an overlooked part of the face, and it can make a positive impact both in men and women in how they look.

"I was always interested in CEOs. It's been known they tend to be taller than the average population; they're good-looking, well spoken people. And I was curious that they might have stronger chins also."

Some examples of high-profile people who have strong chins: "Warren Buffett in terms of the business world. Also John Mack and, on a softer chin would be Bill Gates. (His) chin is a little soft, but he's a self-made man. He wasn't hired for the job. In terms of stars, George Clooney, Arnold Schwarzenegger, Brad Pitt, they all have strong chins.

"And that's not something you can exercise to make bigger. You either have it or you don't. Surgery's the only option (if you don't)."

Antell explained that a chin implant is a soft, rubbery, flexible material that can be inserted with a small incision. "It sits right on the chin," he says, "to give you a stronger impression. And it also increases the distance under the chin to give you a cleaner look and minimize the double-chin.

"They're typically in there for life once they're put in. But if, for some reason, you decided you didn't like it, short-term after the surgery, you could take it out. I've rarely had to do that.

"I've seen a doubling in the last five years of people having chin implants. Sometimes it'll be done in conjunction with a face-lift or liposuction to minimize the double-chin."