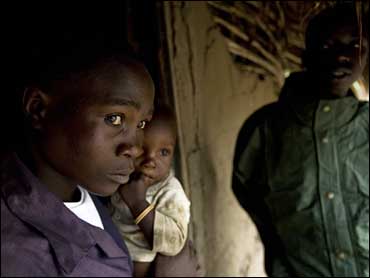 Some beat their heads against the wall until doctors inject them with tranquilizers. Others remain mute for days, their eyes darting around like frightened animals.

In recent weeks, hundreds of child soldiers in eastern Congo's catastrophic war have returned home, sometimes to the same villages where they killed and pillaged. Some have been forced back out with threats of vengeance, and even ostracized by their own families.

These children were kidnapped by rebels and used as fighters, laborers, porters and sex slaves in a war that has torn the mineral-rich region apart for years. Children helped slaughter some 150 civilians in a two-day massacre in Kiwanja in November, one of the latest atrocities in a relentless cycle of ethnic warfare.

But in January, President Joseph Kabila invited troops in from neighboring Rwanda to help end the conflict. Rebel leader Laurent Nkunda was arrested and his fighters integrated into the army - and child advocates are seizing upon the relative stability to persuade militias and rebels to let go of those under 18. At least 478 children, including 15 girls, were demobilized in eastern Congo in January and February, according to UNICEF.

Stripped of their camouflage uniforms, guns and machetes, many of the youngsters still have raw aggression programmed into them through years of being pumped up with drugs and thrown into battle. Some have scars on their arms from knife cuts where herbs and other concoctions were rubbed under the skin to convince them that bullets would ricochet off their bodies.

Aid workers took an Associated Press reporter to speak to some demobilized child soldiers on condition that no questions be asked that might upset them. Their names are being withheld to protect their identities and to avoid reprisals.

Aid workers say child soldiers have been programmed to lie by the militias and rebels - about their ages, names, where they are from and how they were recruited.

Four of them described how they willingly joined the Mai-Mai Patriotic Resistance a month before the Kiwanja massacre. The former child fighters say they were between 15 and 17 and were in their fourth year of school.

"Our land was invaded, so we were obliged to fight. We decided to go and fight together," said one, a teenager wearing new white tracksuit pants who taps one knee up and down nervously.

(CBS)
His friend said he was encouraged by his parents to fight.

Joseph N. Giza, who works with the Congolese group Heal Africa, said that was not unusual: "Can you imagine? Sending your children to a war you are busy running away from? The children were used as cannon fodder. We have found some as young as 10 years old."

Aid workers, though, say they have a lot of hope the former child soldiers can be rehabilitated, noting that many are able to recover relatively quickly - returning to normal family life and going back to school.

Since 2004, more than 30,000 children across the country have been demobilized and reintegrated with assistance from UNCEF. But it is estimated that around 3,500 children are still with armed groups in Congo.

In the final months of 2008, rebels loyal to renegade general Nkunda seized large swaths of eastern Congo, driving out defeated army troops and militias. Nkunda, a Tutsi, initially was fighting perpetrators of Rwanda's 1994 genocide of mainly Tutsis by Hutus who escaped into eastern Congo.

(U.N. Photo/Marie Frechon)
(Left: Former child soldiers board a helicopter flight of the United Nations Organization Mission in the Democratic Republic of the Congo for repatriation to undisclosed areas of the country, January 13, 2009.)

Congolese civilians also formed militias and took up arms against the rebels. Politicians who funded these militias encouraged child recruitment.

"The army was looting and raping instead of defending people, as were the rebels. The people felt absolutely abandoned," Giza said.

A child protection officer, who spoke on condition of anonymity for fear of reprisals, is helping set up community groups and persuading them to accept back the child fighters.

"Before we reunite the children, we go to the parents and communities," she said. "We explain that these are just children who have been manipulated by adults, that they did not understand what they were doing. What they need is a lot of love and attention."

But dozens of youngsters returned home to face death threats. They've fled to a transit home for child soldiers in Goma, run by Concerted Action for Disadvantaged Youth and Children with money and expertise provided by the U.N. Children's Fund.

(Getty Images/AFP/Simon Maina)
(Left: A 2003 file photo of a Congolese Patriotic Union (UPC) child soldier, walking through a market in the Ituri region of the Democratic Republic of the Congo. According to Human Rights Watch, children are direct participants in war in at least 17 countries.)

Fidele Rutabagisha, director of the Congolese group, said that since Jan. 20 they have reunited 360 youngsters with their families but 35 have returned, fearing for their lives.

Both windows of his office have been shattered, smashed in a hail of stones when some of the children rioted. Rutabagisha said they did not understand why some were being loaded into a truck to go home, and others, whose families have not yet been found or prepared for their return, felt left behind.

A rambunctious crowd of 229 was in the stony yard one recent day, some playing soccer, others chatting, when a van pulled up with 29 new arrivals. Among them was a 16-year-old who says he fought with Nkunda's rebels for six years.

There are only nine girls at the home, three of them pregnant. Save the Children says few girls enslaved by the rebels have been demobilized, which adds to their chances of being rejected by their communities and forced into prostitution.

The crowd at the home broke into hoots of laughter and some angry comments when the new arrivals were handed secondhand clothing, including some pants that ballooned around the boys' narrow hips.

Here, those interested are given school lessons. Others are trained in brick-making, handicrafts and carpentry. They have group therapy and individual meetings with counselors, though Giza noted there is a lack of psychologists in eastern Congo. In the evenings, there's dancing, singing and, when there is electricity, movies.

Rutabagisha said they have had to deal with aggressive bullies who try to hurt the other kids and themselves. Some suffer withdrawal symptoms from drugs they were given to overcome their inhibitions about killing.

"We've had them beating their heads and fists against the walls and doctors have to tranquilize them," he said. "And yesterday, we had a child who has been with us five days speak for the first time."

Rutabagisha said the biggest concern expressed by children at the home is that they could go home, only to find themselves again forced into combat.

Back in Kiwanja, the former child soldiers also worry about their futures. One, who says he has always loved tinkering with engines, has been lucky. Congo's Scouts Federation found him a job apprenticing to a mechanic.

Another says he wants to go back to school, but his mother shakes her head, saying they don't have the money. She points to their mud hut with its badly thatched, leaking roof and a bed of cabbages that she sells to survive.

Aid worker Faustin Lyabahinduka is especially concerned: "We have to worry what's going to happen when these children get to be 20, because what's been committed against them so far is an intellectual genocide."