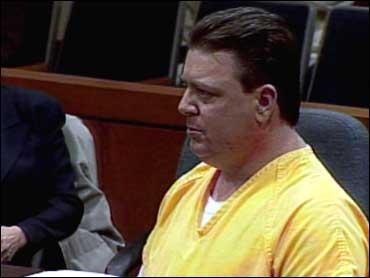 A weeping Joseph Smith apologized Tuesday for the abduction, rape and murder of 11-year-old Carlie Brucia two years ago, telling a judge he had taken large amounts of cocaine and heroin that day in hopes of killing himself.

Smith told Circuit Judge Andrew Owens, who will sentence him to death or life in prison, "I do not ask for mercy for myself. The only thing I can see to give me a life sentence is for my family. I do not want to see them hurt any further."

Carlie was abducted while walking home from a friend's house in February 2004, an attack that was caught on a car wash surveillance tape and broadcast nationwide.

Carlie's stepfather, Steven Kansler, said Tuesday that he wasn't moved by Smith's words or the arguments.

Friends and even Smith's brother said they recognized the burly mechanic grabbing the young girl's wrist on the tape as Smith. A jury found the 39-year-old guilty last November and recommended by a 10-2 vote that he be executed.

Owens will ultimately sentence Smith on March 15. Under Florida law, he must give the jury's death sentence recommendation "great weight."

Smith told Owens during the second day of the sentencing hearing Tuesday that he had been a heroin addict since he was 19 and had unsuccessfully tried to quit several times. He said his wife had kicked him out of their home in January 2004, he had lost his job and, in the hours before abducting Carlie, he tried to overdose.

"I just wanted to die that day," he said. "I take responsibility of my crimes. I don't understand how this could have happened."

But prosecutor Debra Johnes Riva said Smith was lucid enough after the crime to stash Carlie's body and get rid of her clothes and backpack. And days later he told his brother where he had put the body.

"He has an absolute, complete memory of the crime," Riva said.

Riva dismissed arguments by defense attorney Adam Tebrugge about Smith's drug use and the idea that he could lead a productive life in prison and be a positive influence on his three daughters if spared.

None of that, she said, "outweighs the horrible crimes that were committed against Carlie Brucia."

Tebrugge had implored Owens to spare Smith, saying that he had sought help for his drug addiction but never received it. He also suggested the community would better heal if Smith was given life in prison and forgotten, rather than sentenced to death, meaning years of appeals.

Carlie's mother, Susan Schorpen, could not attend the sentencing hearing because she is jailed on drug and prostitution charges. In a letter read by Riva on Monday, Schorpen said the pain of losing her daughter led her to institutionalize herself three times and take drugs to numb the pain.

Before the jury recommended Smith be executed, The Early Show co-anchor Hannah Storm asked if she thought Smith deserves the death penalty, to which Schorpen replied, "Of course. It's just — our judicial system doesn't move fast enough for me. He gets more — I mean, what is it, 12 years he gets for appeals? My daughter didn't even make it to 12. I've got a problem with that."