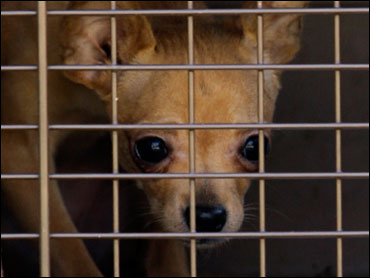 The restaurant chain's beloved mascot, Gidget, died this week, but investigators in the Detroit suburb of Dearborn have their hands full with the four-legged friends.

The two-story house in the wolverine state where the dogs were found is littered with feces and trash. The 54-year-old man who lives there has been taken to a hospital for observation. Police say the man appeared confused and disoriented.

Police say about 150 dead dogs were also found, they were packed in freezers in the basement.

Dearborn Police Chief Ronald Haddad said Friday that 112 live dogs have been removed from the home, and police believe about five more may be hiding inside. He says a criminal investigation is under way.

The rescued dogs were taken to a shelter, where many residents have donated food and filled out pet adoption applications.

81-year-old Margaret Metas dropped off four 20-pound bags of dog food at the shelter. She has two dogs at her Dearborn Heights home and said she didn't want to see any of the rescued dogs for fear she would want to keep one. 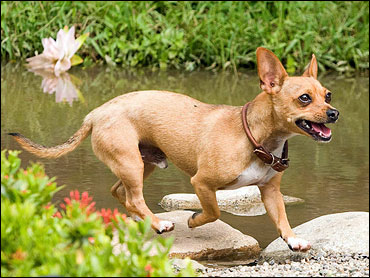 (Walt Disney Pictures)
"It's not much. It's only four bags, but it will feed them today," Metas said. "I couldn't handle the 40-pound bags. I couldn't get them off of the shelf and into the cart. ... They're just too heavy."

Shelter volunteers told people interested in adopting the dogs it would be about a week before they could go to homes. The group Friends for the Dearborn Animal Shelter was accepting donations on its Web site to help.

"This is a good opportunity to do something good," said 32-year-old Max Isrow of Roseville, who hoped to adopt one of the dogs.

Neighbors in the past had complained of an odor at the two-story home, which had a neatly cut lawn and manicured bushes. But this week was the first time Dearborn officials got inside, and crews needed masks to breathe.

Trash was piled from floor to ceiling in places, and feces and urine was throughout the home.

Investigators have said man living in the house was apparently hoarding the dogs.

The smell, noticeable from the street Thursday and Friday, may have been contained previously because windows were closed and covered.