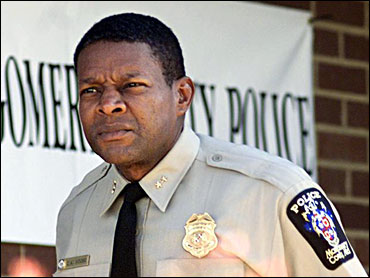 The Maryland police chief who gained celebrity status during last fall's Washington area sniper shootings has filed a lawsuit to win the right to tell his story.

Lawyers for Montgomery County, Md., police Chief Charles A. Moose are seeking an injunction to bar the county's Ethics Commission from taking any action against him for writing about the events surrounding the shootings.

"Any attempt to sanction, prosecute or take disciplinary action against Chief Moose based upon him writing or publishing a book or working on a screenplay would violate the First Amendment," Ron A. Karp, head of Moose's legal team, told The Associated Press on Wednesday.

As head of the county police department, Moose helped lead a task force of local, state and federal law enforcement agencies that spent three weeks trying to stop a rash of shootings in the region surrounding the nation's capital.

The lawsuit, filed Wednesday in U.S. District Court here, charges that Moose has been deprived of his constitutional right of free speech. The ethics panel contends that participation in the book or movie projects would allow Moose to profit from the prestige of his office and possibly compromise the prosecutions.

Moose, 49, has been on active duty with the District of Columbia Air National Guard since mid-March. He is a major in a military police detachment.

Despite the ethics panel decision, he has continued work on the book commissioned by Dutton Publishing, Inc., and has completed more than seven chapters.

Sniper suspects John Allen Muhammad, 42, and Lee Boyd Malvo, 18, have been linked to 20 shootings, including 13 deaths, in Virginia, Maryland, Louisiana, Georgia and the District of Columbia. They were arrested Oct. 24, and both men await capital murder trials in Virginia for two of the fatal shootings.

On Wednesday, lawyers for Malvo said past federal charges against their client should prohibit Virginia prosecutors from putting him on trial.

The federal charges were dropped in November, when Malvo and Muhammad were transferred to Virginia for prosecution.