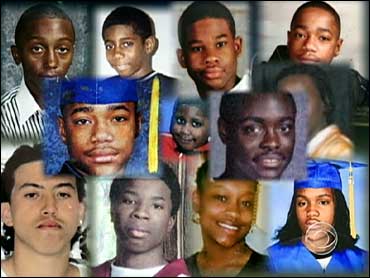 Chicago police officers secure the scene of yet another slaying. The city is setting a grim record this year and many of the victims are young people, as CBS News correspondent Dean Reynolds reports.

Thirty-two Chicago public school students have been killed so far this school year, according to the Chicago Police Department.

And what is almost as disconcerting is the adjustment the that city - and even the children themselves - seem to have made to this uncommon carnage.

Just listen to what the kids at the Team Englewood Community Academy on the city's South Side have to say.

How dangerous is their neighborhood?

"On a scale of one to 10, I give it an eight," said Antoine White, a Team Englewood sophomore.

And it's been that way for so long there's an almost shoulder-shrugging indifference to the danger.

It's easy to get a gun, they students remark coolly. If you wanted to get one today, you could, no problem. Most people know someone who's been shot.

The South Side is hardly a vacation destination. But it's exactly where a group of students from Howard University in Washington, D.C., have gone to spend their alternative spring break.

Alize Beal, a Howard sophomore, is part of the program that also sends students to Virginia, New Orleans, and Detroit.

"It was the amount of violence, the deaths and the fact that i think a lot of students are misunderstood," Beal said.

The Howard students have been setting up meetings, meetings where conversation is stressed over vengeance, where clubs are preferred over gangs. The idea is that the high school students will see their college counterparts as success stories.

"They really need that visual so they can see other African-Americans right now," said Peggy Kolrellis-Byrd, Team Englewood's principal. "I think that peer-to-peer, they have a lot of influence."

"We are here to show them it's not impossible," said Beal.

And not too late.