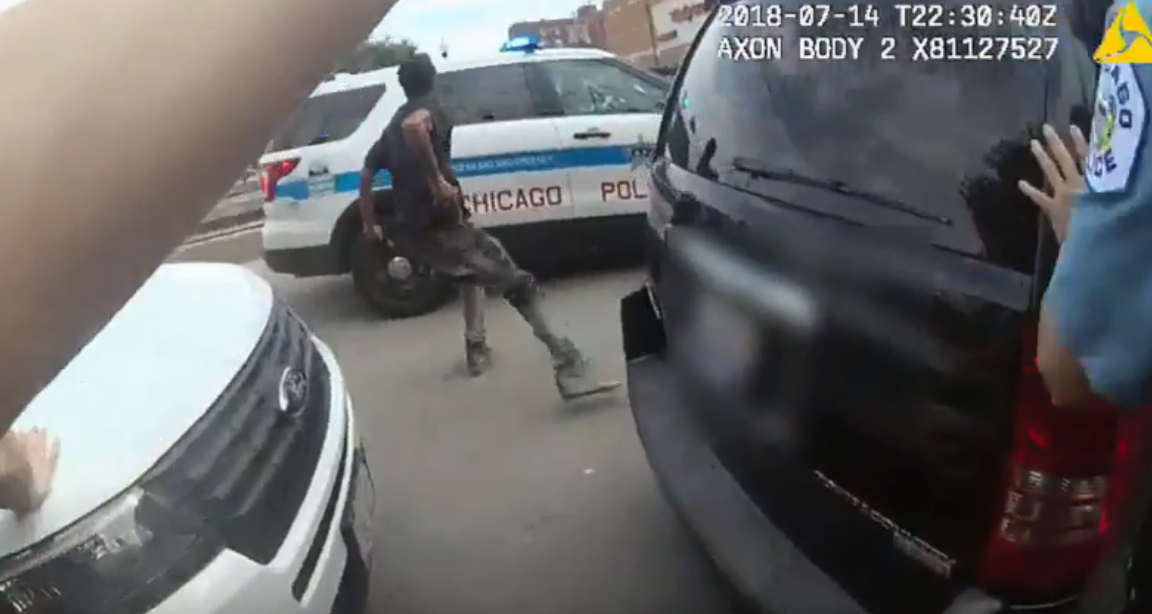 CHICAGO -- A man killed by Chicago police had a gun in a holster at his hip and was shot multiple times as he ran away, spun around and reached toward his waist, according to footage released Sunday from an officer's body-worn camera. Police Superintendent Eddie Johnson said it's the quickest he has ever ordered such video released and that he hoped to dispel rumors that Harith Augustus, 37, was unarmed. He also hoped that making the 30-second clip public before a planned protest would prevent another violent confrontation between residents and officers.

The short video appears to show a gun tucked into Augustus' waistband but it is unclear if and how much the video is edited at all.

Protesters angry about the killing Saturday took to the streets in a city that's struggled with police shootings, especially against black men and other minorities. Some threw rocks and bottles at officers -- including ones filled with urine -- and police pulled people to the ground and hit them with batons.

"The community needs some answers and they need them now," he told reporters Sunday. "We can't have another night like last night."

He said Augustus' family was in favor of releasing the video for the same reason.

Four protesters were arrested in the clash, and some police officers suffered minor injuries. Two squad cars also were damaged.

The video, which lacks sound, shows four officers approaching Augustus outside a store on the city's South Side. An officer points to Augustus' waist and he backs away. Three officers try to grab his arms and he tries to get away, backing into a police cruiser as his shirt flies up and shows the gun.

The footage pauses and zooms in on the weapon, which police spokesman Anthony Guglielmi said was done to ensure a semi-automatic handgun in its holster and two bullet magazines tucked into Augustus' waist could be seen clearly.

Augustus then runs away and into the street as a police SUV drives up. He spins and darts between the SUV and the police cruiser as he reaches toward his waist.

Augustus did not fire his weapon and the footage does not show him pulling the gun out of its holster, though he does appear to try to grab something at his waist, Guglielmi said. Police also released a 50-second slow-motion clip showing Augustus reaching toward his waist. It's not clear if he was going for the weapon.

Johnson said Augustus had a valid firearm owners' identification card but detectives have found no documentation that he had a permit to carry a concealed weapon.

A resident of the area, Gloria Rainge, told the Chicago Sun-Times that Augustus, known in the Grand Crossing neighborhood as "Snoop," worked at a barbershop and had a 5-year-old daughter.

The Rev. Jesse Jackson called the shooting a tragedy and said in a statement that it's a blessing Augustus didn't bring the girl with him Saturday, as he's known to do.

Officers patrolling on foot tried to question the man over a "bulge around his waistband" that suggested he was armed, patrol chief Fred Waller has told reporters.

The Civilian Office of Police Accountability, which investigates officer-involved shootings, said it was analyzing the video and asking anyone who may have captured cellphone footage to share it with the agency.

It was at least the third time in the last two weeks that a Chicago police officer shot someone.

Chicago has a troubled history of police shootings. The city erupted in protest in 2015 after the release of a video showing a white police officer shoot a black 17-year-old, Laquan McDonald, 16 times a year earlier.

The officer, Jason Van Dyke, was charged with murder. McDonald's death led to the ouster of the police chief and a series of reforms meant to prevent future police abuses and to hold officers accountable.

Jackson referenced the case as he called for video into Augustus' shooting to be released.

After the shooting on Saturday evening, tensions rose quickly, CBS Chicago reported. Dozens of people showed up, and at some point the officers had to push the crowd back.

"We're pissed off; we're tired," community activist William Calloway said on Sunday the day after the shooting and standoff with officers. "You're killing us!"

"Our voice is not gonna be silenced."

Calloway demanded the police release the video of the shooting immediately.

Within hours of Calloway's news conference, police released the video.