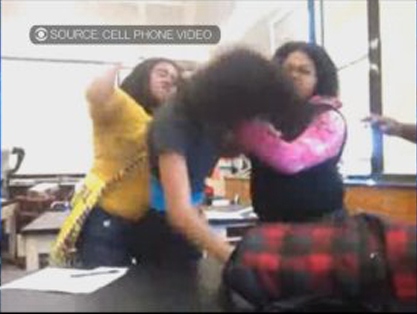 The alleged assailants, Sara Mejorado, 17, and Aurelia Mejorado, 18, were charged with misdemeanor battery for the attack last week during a biology class at Roger C. Sullivan High School.

A Chicago Public Schools spokesperson confirmed the two sisters have been suspended and face further discipline in the attack, WBBM reported.

"Chicago Public Schools does not tolerate violence among students in any way. The two students involved in this incident have been suspended from school with further discipline pending," school system spokeswoman Marielle Sainvilus said in an email.

"The safety and security of our students is a top priority and we will take whatever actions are necessary to ensure that schools remain a safe environment for learning."

In the video, the victim is seen trying to fend off the two sisters as they pull her hair and hit her repeatedly in the head. At one point, one of the sisters begins throwing the victim around and appears to slam her head into a table, WBBM reported.

At one point, a woman, possibly a teacher, tries to intervene in the attack, but then backs away.

According to broadcast news reports, students at Sullivan have said fights like this occur regularly at the school.