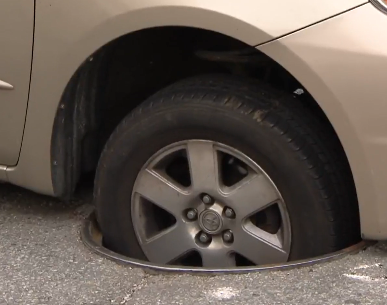 CHICAGO -- When not secure, manhole covers can lead to devastating consequences. CBS Chicago reports that thousands of missing, loose or out-of place manhole covers have resulted in serious damage, and even death.

"It's dangerous for us," said Esmeralda Gonzaga, whose minivan got sucked into an open manhole. "And I think the city should take care more of the street."

Gonzaga said a tire of a passing truck flipped the cover out of place, leaving her no time to react. A tow truck later pulled her car out and crews on the scene put the manhole back in place. Eventually, it was replaced and secured with concrete.

Loose manholes are located all across Chicago, including one on Augusta Boulevard that shakes, rattles and pops when a car passes or drives over it, making it a potential danger to motorists. Another one in the middle of Chicago and Western Avenue easily pops up.

The covers are heavy and can weigh up to 200 pounds. One flew through a vehicle's front windshield, struck a woman and then blasted out of the back window.

"Every day is a struggle," said the father of Caitlin Clavette, who was killed in that 2016 incident. "Every day you miss her. Miss her smile."

The 35-year-old Boston teacher, athlete and animal lover was about to get engaged when the accident happened.

"We have suffered the worst thing that could happen to people," said her mother.

CBS Chicago obtained 311 data from the city of Chicago and found that there have been 3,449 complaints of missing manhole covers and grates since 2016. The roads with the most complaints include Ashland, State, Cicero, Kedzie and Western Avenue.

The Chicago Department of Transportation said that for every complaint, an inspector is sent to investigate. Often the covers are owned by utility and phone companies, which are then alerted to make repairs.