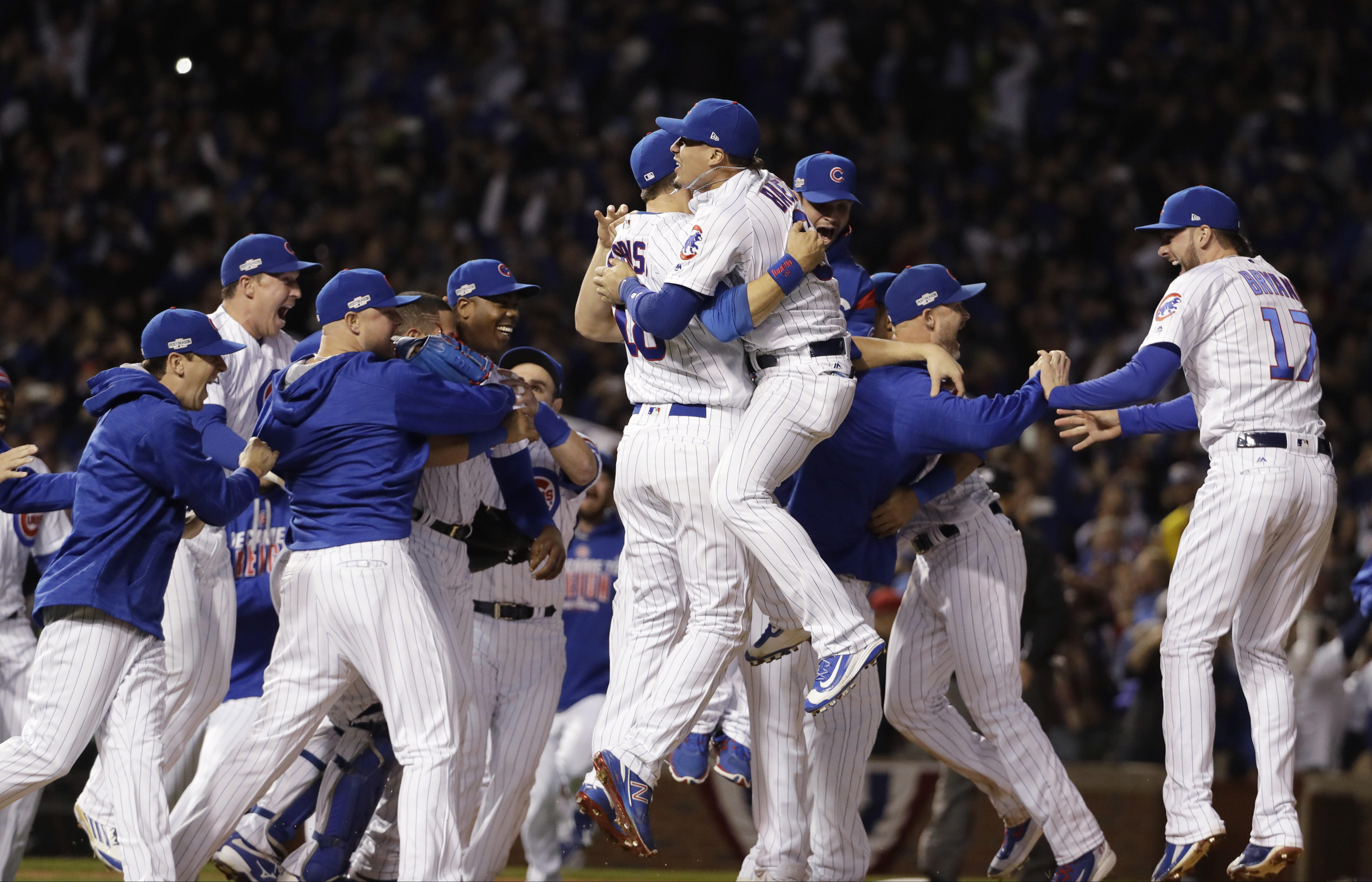 No boneheads here! The Chicago Cubs clinched the National League pennant Saturday in a 5-0 victory over the Los Angeles Dodgers, for their first trip to the World Series since 1945.

The team has the chance to beat the longest World Series drought in history: The last Cubs’ World Series victory was in 1908, when a baserunning error by New York Giant Fred Merkle gave the Cubs their victory.

The Cubs will be facing American League champions the Cleveland Indians, who have the second-longest World Series drought, with nary a win since 1948.

They left no doubt in doing so, as MLB ERA champion Kyle Hendricks thoroughly out-pitched ace Clayton Kershaw in a game that won’t be forgotten, CBS Chicago reports.

Authoring the finest outing of his career, Hendricks fired 7 1/3 shutout innings of two-hit ball, walking none and striking out six. And his offense provided him with all he’d need before Kershaw even recorded an out.

Dexter Fowler led off the game with a double and scored on Kris Bryant’s RBI single for a 1-0 lead. Two batters later, the Cubs added another run for on a Ben Zobrist sacrifice fly after Dodgers left fielder Andrew Toles had dropped a fly ball for an error.

Chicago tallied runs in four of the five innings Kershaw pitched and an extra-base hit in each of those frames. A Fowler RBI single in the second inning gave the Cubs a 3-0 lead, then a solo homers from Willson Contreras and Anthony Rizzo in the fourth and fifth innings, respectively, sent the Wrigley Field faithful into pandemonium.

Kershaw took the loss, allowing five runs, four earned, in five innings on seven hits while walking none and striking out four.

The World Series starts Tuesday, with the Indians hosting the Cubs. First pitch at is 7:08 p.m., and the hometown call can be heard on 670 The Score.

Overjoyed fans streamed out of Wrigley Field and into the streets Saturday night after the Cubs beat the Los Angeles Dodgers in Game 6 of the NL Championship Series to earn their first trip to the World Series since 1945.

Many people donned Cubbie blue and held “W’’ flags. Two people climbed a traffic pole, with one man shimmying all the way to the end. Police said he was later arrested, as were a couple of fans who lit fireworks.

A majority of the crowd, however, celebrated the victory peacefully. Many took selfies in front of the stadium and hugged one another. Some also broke out in song, while others shook up beer bottles and sprayed the crowd.

Police officers, including about a dozen cops on horseback, kept a close eye on the crowd. And some officers were seen giving high-fives to fans as they walked by.

Brian Dusza, who was at Wrigley for Game 6 of the 2003 NLCS, never thought he’d see the team win the pennant

“I never thought I’d see it,” Dusza, 49, said after attending Saturday’s game. “I can’t even describe what I’m feeling.”

Among the few thousand fans who stayed in their seats an hour after the game ended was Ed Koenig of Darien. His eyes welled up as he talked about his father, who died in May.

“He never got to see this,” Koenig said. “I haven’t been to a game this season without him and when my friend won a lottery for these tickets, I thought ‘how am I going to go without my dad?’”

But his friend convinced him to go.

“I have his watch on,” Koenig said, showing off the watch on his wrist. “I thought I was going without my dad, but I’m with him.”

Before the game, Steve Zucker said that if the team won, he would go to his father’s grave and leave him a Cubs hat and T-shirt.

“My dad died playing cards, listening to the game on a little transistor radio, so I may bring that, too,” Zucker said.

Cubs pitcher Kyle Hendricks said after the game that this win and trip to the World Series was for the fans.

“I hope they enjoy this. They have been waiting a long time,” Hendricks said. “Best fans in the baseball, most dedicated fans, and they deserve a lot more of these.”

The Cubs will face the Cleveland Indians in Game 1 on Tuesday, with the series returning to Wrigley Field for Game 3 on Friday.

First baseman Anthony Rizzo joked that he’s holding onto the baseball that was used in the final out, sending the Cubs to the World Series, CBS Chicago reports.

He gave the ball a kiss and said, “I am sleeping with this tonight. We’re going to the World Series!”