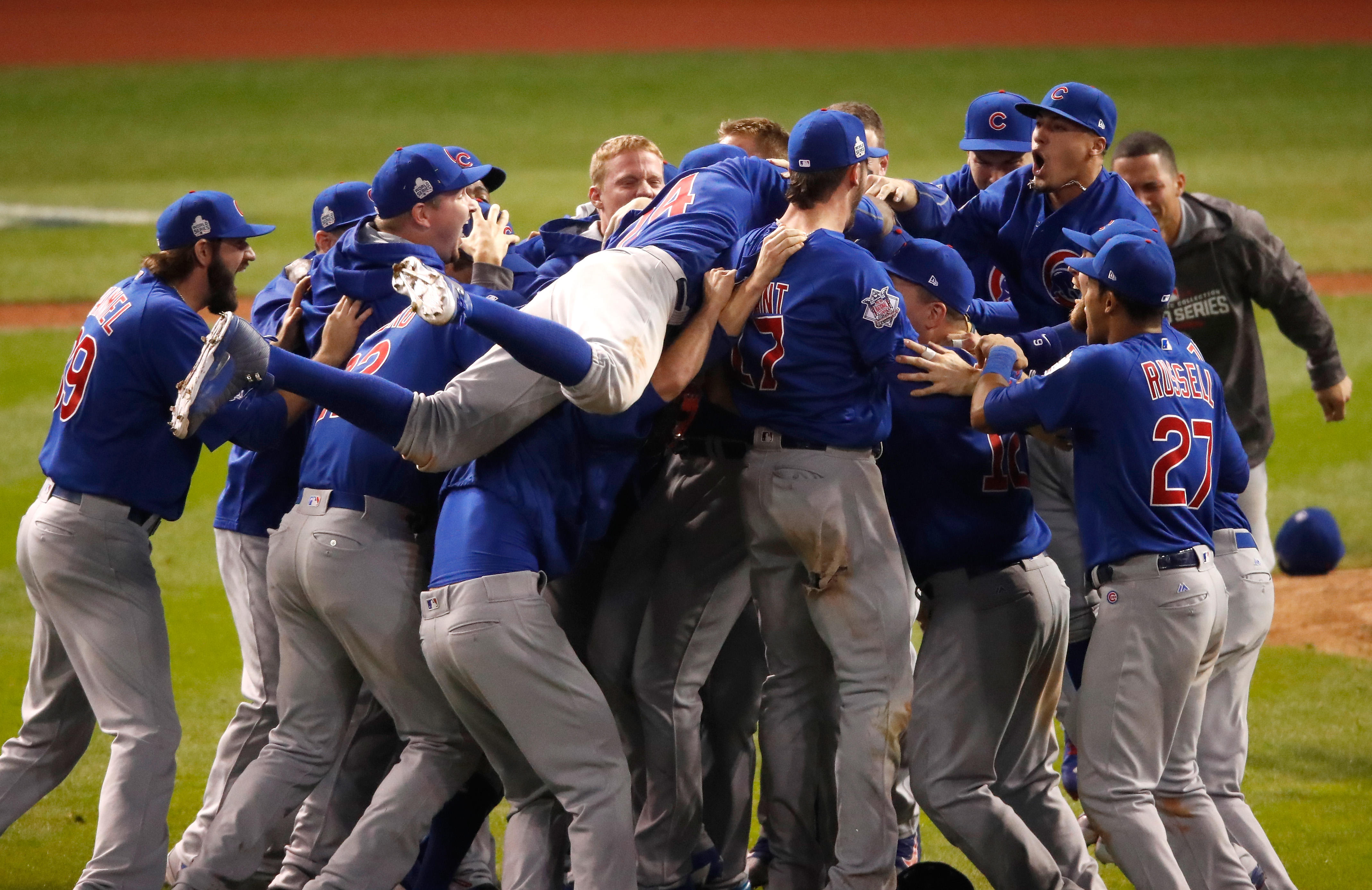 CLEVELAND -- The 108-year wait ’til next year is finally over. The Chicago Cubs are World Series champions.

Ending more than a century of flops, futility and frustration, the Cubs won their first title since 1908, outlasting the Cleveland Indians 8-7 in 10 innings of a Game 7 thriller early Thursday.

That set off “a citywide celebration back home,” notes CBS Chicago.

Lovable losers for generations, the Cubs nearly let this one get away, too. All-Star closer Aroldis Chapman blew a three-run lead with two outs in the eighth inning when Rajai Davis hit a game-tying homer.

But the Cubs, after tormenting their fans one more time, came right back after a 17-minute rain delay before the top of the 10th.

Ben Zobrist hit an RBI double and Miguel Montero singled home a run to make it 8-6. Davis delivered an RBI single with two outs in the bottom half, but Mike Montgomery closed it out at 12:47 a.m., and the celebration was on.

Manager Joe Maddon’s team halted the longest championship drought in baseball history as his club became the first to overcome a 3-1 Series deficit since the 1985 Kansas City Royals.

Cleveland was trying to win its first crown since 1948, but manager Terry Francona’s team lost the last two games at home.

CBSSports.com’s Matt Snyder notes that, “LeBron James, J.R. Smith and the troops were in the house for Game 7 in a suite. Smith even took his shirt off to get the crowd going.”

But try as they might, the Cavaliers couldn’t get the Indians over the top. The Cavs came back from a 3-1 deficit to win the NBA championship last spring and break Cleveland’s 5-year pro sports title drought. James was a leading cheerleader for the Indians during their post-season run.

The Cubs then ended more than a century of misery for their loyal fans -- barely.

Third baseman Kris Bryant, one of Chicago’s young stars, began smiling even before fielding a grounder by Michael Martinez and throwing it across to Rizzo for the final out.

Zobrist was named World Series MVP, a year after he helped the Royals win the championship.

Zobrist was among the players brought to the Cubs by Theo Epstein, as the baseball guru added another crown to his collection. He also assembled the Red Sox team that broke Boston’s 86-year drought with the 2004 championship.

From Curse of the Bambino to the Billy Goat Curse, he ended another jinx.

The Indians, meanwhile, added more heartbreak. In their previous World Series appearance, they were a double-play grounder from winning the title before losing Game 7 in 11 innings to the Marlins.

“It’s going to hurt. It hurts because we care, but they need to walk with their head held high because they left nothing on the field,” Francona said.

After defeating San Francisco and the Los Angeles Dodgers in the playoffs, Chicago became the first team to earn a title by winning Games 6 and 7 on the road since the 1979 Pittsburgh Pirates.

While Cubs fans hugged with delight, there was only despair for the Indians, who now have gone longer than anyone without a title.

Dexter Fowler homered on Corey Kluber’s fourth pitch of the game, 23-year-old Javier Baez and 39-year-old David Ross also went deep for the Cubs, who led 5-1 in the fifth inning and 6-3 in the eighth.

Chapman wound up with the win and Montgomery got one out for his first save in the majors.

Bryan Shaw, who gave up a leadoff single to Kyle Schwarber in the 10th, took the loss.

It was just the fourth time that a Game 7 went to extra innings, and the rain delayed play until 12:11 a.m. in a still-packed ballpark.

Then in the bottom half, Carl Edwards Jr. struck out Mike Napoli, Ramirez grounded out, Brandon Guyer walked and Davis hit an RBI single. Montgomery took over, and helped set off a wild celebration on Chicago’s North Side.

Cubs jumped on each other between the mound and second base, and their fans in the stands kept cheering.

Twenty-one other teams had won the World Series since Cubs last were champions. They reached the top again on the 39,466th day after Orval Overall’s three-hit shutout won the 1908 finale at Detroit in a game that took 1:24. At the time, Theodore Roosevelt was president, New Mexico, Arizona, Alaska and Hawaii were not yet states, and the first Ford Model T car was two weeks old.

The Cubs were last champions when Joe Tinker, Johnny Evers and Frank Chance won consecutive titles in 1907-08, until now the only ones in team history. The Cubbies had not even reached the Series since 1945.

This one was for Ernie Banks, Ferguson Jenkins, Ron Santo and Billy Williams, who never reached the postseason.

For Lee Elia and the “nickle-dime people” who spent so many wind-swept afternoons in the Friendly Confines watching loss after loss.

For William Sianis, the Billy Goat Tavern owner said to have proclaimed when he was asked to leave Wrigley with his pet during the ’45 Series: “Them Cubs, they ain’t gonna win no more.”

For Steve Bartman, whose life was upended when he tried to catch a foul ball as the Cubs came apart in the 2003 playoffs.

And for Harry Caray, who promised viewers after the 1991 finale that “sure as God made green apples, someday the Chicago Cubs are going to be in the World Series.”

Maddon, hired before the 2015 season, won his first Series title after establishing a loose clubhouse that featured at times Warren the pink flamingo, Simon the magician and the motto: “Try not to s-ck.”

Thousands of blue-clad Cubs fans found a way to get tickets and appeared to number nearly half the crowd of 38,104 at Progressive Field. They rocked the joint when Fowler put Chicago ahead with the first leadoff home run in a decisive Game 7.