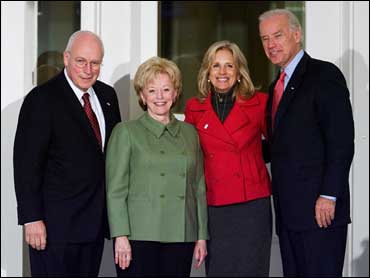 Vice President-elect Joe Biden got a tour of his new home from the outgoing occupant, Vice President Dick Cheney.

"The Vice President-elect and Dr. Jill Biden met with Vice President Cheney and his wife Lynne at the Naval Observatory this evening," said Biden spokesperson Elizabeth Alexander in a statement. "The Bidens thank the Cheneys for welcoming them into their home and for their gracious hospitality."

Biden arrived Thursday at the Naval Observatory, the home for vice presidents, with his wife. They were greeted with smiles by Cheney and his wife, Lynne.

Biden said, "Mr. Vice President, how are you doing?"

Cheney replied, "Joe, how are you." He congratulated Biden on his victory.

"It was a good visit," Cheney Press Secretary Megan Mitchell said in a statement. "The Cheneys enjoyed giving the Bidens a tour of the residence and wished them well as they make it their home in January."

The meeting lasted a little over 50 minutes. The Vice President and his successor are believed to have discussed the transition of power.

Biden has called Cheney "the most dangerous vice president we've had probably in American history" and said he couldn't name a single good thing Cheney had done. But even if he won't acknowledge any similarities, there's one way that Biden wants to be like Cheney — a strong partner in governing the country.

Biden is proving to be a hands-on No. 2 to President-elect Barack Obama. He is carving out his own niche, specializing in foreign affairs, his area of expertise for decades in the Senate, and sticking close to Obama.

Past vice presidents have often been relegated to ceremonial roles, without major input on daily decisions. But the last two vice presidents, Cheney and Al Gore, have been extraordinarily involved and insisted on private weekly lunches with their bosses.

Biden has said he told Obama, before accepting the running mate slot, that he wouldn't want a peripheral assignment like reorganizing government, which Gore took on, along with other tasks. In an interview with New Yorker magazine last month, he said he told Obama: "I don't want to be a vice president who is not part of the major decisions you make."

Biden himself will have an experienced aide who can help his voice be heard in the White House. He chose former Gore chief of staff Ron Klain to fill the same job for him, Democrats said Thursday.

Biden will certainly have a special interest in the Iraq war, with his son scheduled to deploy there this month.

So far, Biden has been working closely with Obama. He has been in almost all the president-elect's meetings at his new government office space in Chicago and has been dispatched to make calls to several foreign leaders.