On the heels of an interview with a North Dakota radio station this week in which he advised it would be a mistake for the Republican Party to seek broader appeal by moderating its stance on issues, former vice president Dick Cheney today said there is room in the GOP for moderates.

"I think partly it's a semantic problem," he told CBS News chief Washington correspondent Bob Schieffer on Face The Nation. "I don't think the party ought to move dramatically to the left, for example, in order to try to redefine its base.

"We are what we are. We're Republicans. We have certain things we believe in. And maintaining our loyalty and commitment to those principles is vital to our success."

When asked by Schieffer how the party could broaden its appeal, Cheney said there have been efforts made.

"Jeb Bush, I know, has been working on it," he said, "Eric Cantor, Mitt Romney, trying to find ways to appeal to a broader range of people. I don't have any problem with that. I think that's a good thing to do. But the suggestion our Democratic friends always make is somehow, you know, if you Republicans were just more like Democrats, you'd win elections. Well, I don't buy that. I think we win elections when we have good solid conservative principles to run upon and base our policies on those principles." 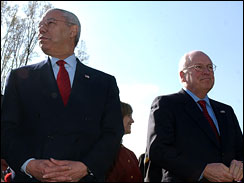 (AP Photo/Susan Walsh)
"Well, if I had to choose in terms of being a Republican, I'd go with Rush Limbaugh, I think," Cheney replied. "I think my take on it was Colin had already left the party. I didn't know he was still a Republican."

"So you think that he's not a Republican?"

"I just noted he endorsed the Democratic candidate for president this time, Barack Obama," Cheney said. "I assumed that that is some indication of his loyalty and his interest."

"And you said you would take Rush Limbaugh over Colin Powell."