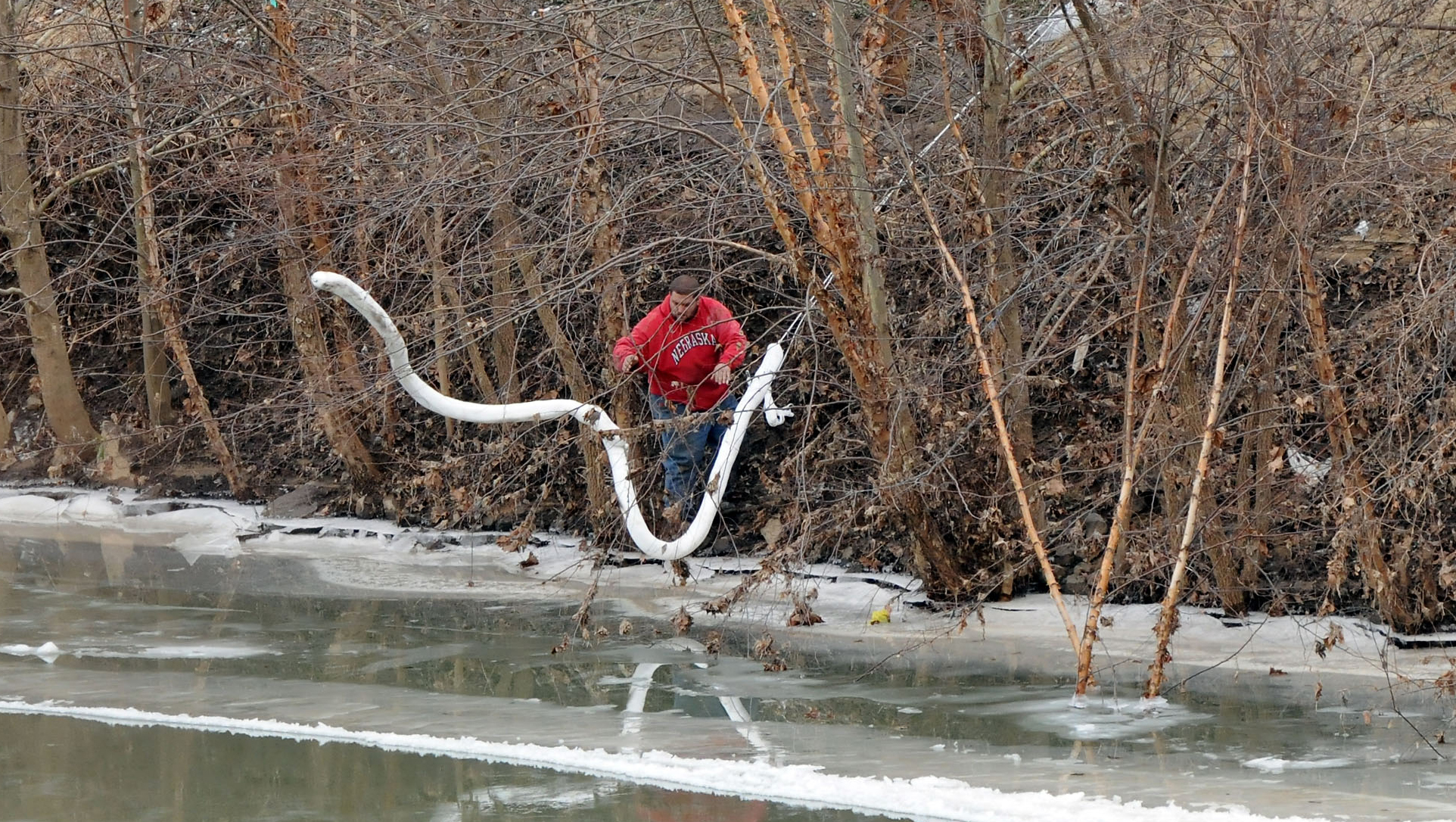 CHARLESTON, W.Va. - At least 100,000 customers in nine West Virginia counties were told not to drink, bathe, cook or wash clothes using their tap water because of a chemical spill into the Elk River in Charleston, with Gov. Earl Ray Tomblin declaring a state of emergency Thursday for all those areas.

The chemical, a foaming agent used in the coal preparation process, leaked from a tank at Freedom Industries, overran a containment area and went into the river earlier Thursday. The amount that spilled wasn't immediately known, but West Virginia American Water has a treatment plant nearby and it is the company's customers who are affected.

"The water has been contaminated," said Tomblin, who didn't know how long the emergency declaration would last.

Officials, though, said they aren't sure what hazard the spill poses to humans and that there were no immediate reports of people getting sick. It also was not immediately clear how much spilled into the river and in what concentration.

"I don't know if the water is not safe," said water company president Jeff McIntyre.

Once word got out about the governor's declaration, customers stripped store shelves in many areas of items such as bottled water, paper cups and bowls.

As many as 50 customers had lined up to buy water at a convenience store near the state Capitol in Charleston.

"It was chaos, that's what it was," cashier Danny Cardwell said.

The don't-drink-the-water declaration involves customers in the counties of Kanawha, Boone, Cabell, Clay, Jackson, Lincoln, Logan, Putnam and Roane. Most of the counties surround the capital city of Charleston, where there was a chemical smell similar to licorice in the air both outdoors and in areas where it had already reached the water supply on Thursday night.

West Virginia lawmakers who just started their session this week won't conduct business on Friday because of the problem and State Department of Education spokeswoman Liza Cordeiro said schools in at least five of the counties will be closed. Many students already missed some time this week because of the frigid weather.

McIntyre said the advisory was issued "because we don't know. I don't have anything to indicate the water is not safe. It's an abundance of caution that we're taking this step. We don't do this lightly, tell our customers not to use the water."

"Until we get out and flush the actual system and do more testing, we can't say how long this (advisory) will last at this time," McIntyre said. When the advisory was first issued for five counties, that as many as 100,000 customers were affected. The company has 170,000 customers in 17 West Virginia counties, as well as in Ohio and Virginia.

Freedom Industries did not immediately respond for comment. The Elk River flows into the Kanawha River in downtown Charleston. The Kanawha eventually flows into the Ohio River at Point Pleasant, about 55 miles to the northwest.

Senate Majority Leader John Unger, D-Martinsburg, said all committee meetings have been canceled and lawmakers will adjourn until at least Monday. Other government offices also will be closed.

Unger, who co-chairs the Joint Legislative Oversight Commission on State Water Resources, said dozens of miles of pipe are affected by the spill.

"Flushing it out, that's going to take some time," Unger told The Associated Press. "You can imagine the infrastructure of the piping through the city and all of those counties."

McIntyre and Tomblin said boiling water first to remove impurities won't help as it sometimes does.

According to a fact sheet from Fisher Scientific, the chemical is harmful if swallowed and causes eye and skin irritation and could be harmful if inhaled.

Tomblin said the advisory also extends to restaurants, hospitals, nursing homes and other establishments that use tap water.

Two fast-food restaurants near the Capitol, a few miles from the spill site, were closed Thursday night, but across the street, a pizza shop remained open.

And at the Little India restaurant in Charleston, owner Meena Anada said she had been drinking water all day, "but I'm not nervous. I'm not going to die."

Little India bar manager Bill LaCourse said he's endured boil water advisories in the past, "but when they tell you it doesn't do any good to boil the water, what can you do?"

About 12 customers were in the restaurant when LaCourse got the word about the shutdown notice and everyone was asked to leave. The situation repeated itself at other restaurants, where workers said they were concerned about what to do about ice machines, hot water heaters and water itself once the emergency is lifted.

West Virginia Delegate Michael Manypenny, D-Taylor, who co-chairs the water resources committee with Unger, said he's been pushing for stronger oversight of industries in order to protect the state's water resources. He said the spill will add fuel to his argument.

"This leaves a lot of questions," he said. "And I think we're going to need an inquiry on why this happens and what we can do to prevent it."