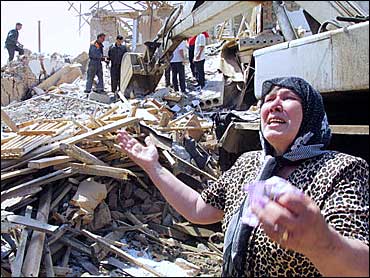 The toll in the truck bombing of a Chechen government compound rose to at least 54 dead and 300 wounded, rescue officials said Tuesday, and the head of Chechnya's Moscow-backed administration called for the region's own police to take over the fight against separatist rebels from federal structures to ensure better security.

Administration head Akhmad Kadyrov said the attack proved that security is lax and that it was necessary to "introduce changes in the conduct of the counter-terrorist operation" in Chechnya, the Interfax news agency reported. He proposed that responsibility for fighting rebels be switched to the region's own Interior Ministry instead of the Moscow-based Federal Security Service and Russian troops.

As top officials of the Nadterechny region of northern Chechnya held their regular morning meeting in the government headquarters in Znamenskoye on Monday, three suicide attackers blew up a truck laden with explosives nearby. The blast reduced eight buildings to rubble and killed or injured government workers, civilians visiting government offices, shopkeepers and residents of neighboring apartments.

Maj. Gen. Ruslan Avtayev, the emergency situations minister for Chechnya, said that as of Tuesday morning, 54 people were confirmed dead, including 16 women, seven children and 10 officers of the Federal Security Service, the intelligence agency that is heading up the war. Of the 300 wounded, 114 had been hospitalized, 57 of them in grave condition, he said.

A Chechen government official in the capital Grozny, speaking on condition of anonymity, said the death toll had reached 55.

Russian and Chechen officials quickly blamed Chechen rebels for the bombing, which closely resembled the December suicide truck bombing that devastated Chechnya's government headquarters in Grozny, killing at least 70 people. The local branch of the Federal Security Service and the regional education, tax and agriculture departments were located in the Znamenskoye compound, which stood close to four two-story residential buildings.

Unlike Grozny, which suffers nearly daily rebel attacks against Russian troops, Chechen police and civilians, the Nadterechny district had been considered remarkably stable. It was the first area to come under the control of Russian forces that entered the republic in 1999, starting the second war in a decade.

"Those who ordered the terrorist act in the settlement of Znamenskoye are the very same people who ordered the explosion of the government complex in Grozny in December 2002," Interfax quoted Ilyasov as saying.

However, Russian Deputy Prosecutor General Sergei Fridinsky said the organizers of the two blasts were different, "although there is a certain link between them," Interfax reported. He said suspects had been identified and were being pursued.

The Russian daily Izvestia reported that Chechen law enforcement officials thought the motive behind the attack might not have been purely political. It said that the head of the Federal Security Service branch in Nadterechny, Mayerbek Khusiyev, had taken a tough line against would-be smugglers of oil and metal from Chechnya. Most of the smugglers' routes lie through the Nadterechny region, and the attack organizers may have hoped to rub out Khusiyev and his team, Izvestia said.